The last time he counted, pro­fessor of history David Stewart said he had over 1,000 rubber ducks in his ‘Army of Duckness’ col­lection.

Stewart said the col­lection began around the year 2000 when he and his mother-in-law were talking about his childhood.

“I made some stupid, throwaway comment like, ‘when I was a child, I didn’t even have a rubber duck, I had to take a bath without any bath toys,’” Stewart said.

Later that day, his mother-in-law made a trip to Walmart and got him a classic, little, yellow rubber duck. Stewart said she gave him the rubber duck the next morning on his way to work, so he sat the first rubber duck on his office desk.

Stewart said stu­dents who came in to have their papers checked would often notice the lone rubber duck sitting on his desk. After a fall break, a student brought him back another rubber duck for his desk.

“She said some­thing like, ‘I remem­bered yours on the desk looked so lonely,’ so I put the other duck on my desk,” Stewart said. “I had two ducks on the desk, so they wouldn’t be lonely.”

Then after Christmas, Stewart said another student came back and gave him a duck to add to his desk. A trend began among stu­dents. More and more stu­dents began bringing him ducks for his desk.

Sophomore Dennis Fassett said he was taken aback the first time he went to office hours and saw Stewart’s col­lection of ducks.

“I was beyond con­fused,” Fassett said. “I think it’s strange but also unique.”

Sophomore Lauren Spears said it would be weird if anyone else had a col­lection of ducks, but she wasn’t sur­prised Stewart had a duck col­lection.

“It’s a little weird, but he should be able to do whatever makes him happy,” Spears said. “I expected him to maybe collect news­papers or mag­a­zines, but I guess he just likes ducks.”

During office hours, both Spears and Fassett said Stewart offered them a nerf gun to shoot the ducks.

“Anyone that goes to office hours knows about the ducks,” Spears said.

Stewart said the name ‘Army of Duckness’ was first sug­gested by a student in ref­erence to the movie “Army of Darkness.” Although he doesn’t have a favorite, Stewart said he likes each of the ducks for dif­ferent reasons.

“There’s probably a couple dozen that stand out in my mind a lot more than others, because someone gave it to me, or because of some­thing I asso­ciate it with,” Stewart said. “The one I got in a tattoo shop in England, the only time in my life I’ve ever been in a tattoo shop, that one kinda stands out.”

Often, Stewart said he asso­ciates certain ducks with spe­cific classes. Inter­est­ingly, he has des­ig­nated some of his ducks to the entire history department of Hillsdale College. Even Pres­ident Larry Arnn has a des­ig­nated duck.

“It’s smaller than all the other ducks, that’s how you know it’s a Dr. Arnn duck; it’s tiny,” Stewart said. “He’s got a little tiny beard. You would probably just say it looks like a garden gnome duck, but it’s clearly a Pres­ident Arnn duck.” 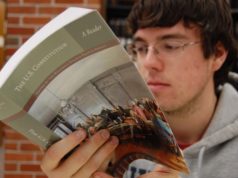