An increase in property taxes could cause Coldwater’s his­toric Fisk House, home to Blue Hat Coffee, to close within the next year, according to Blue Hat owner Phillip Jewell.

Jewell, who owns the property and runs the business with his wife, Catherine, said he is cur­rently exploring his options to get the taxes reduced with appeals to the local assessor and the state.

“We’re looking at all kinds of options: appealing, demo­lition, and moving the building to other local com­mu­nities,” Jewell said.

When Jewell opened the business in 2011, he applied for and received an exemption from the  home­stead property tax. His appli­cation was granted and taxes waived entirely. With a recent property tax val­u­ation audit by the Michigan Department of Treasury, however, the audit “resulted in a reduction of the home­stead property tax exemption from 100 percent to 50 percent for the his­toric Fisk House owners,” according to a news statement from the City of Cold­water.

With this change, the Jewells would only receive half of the exemption that they did in years prior.

“The state deter­mined that because we are part-business and part-living quarters, we only qual­ified for 50 percent of the home­stead extension,” Jewell said.

In effort to avoid paying such an increase, Jewell said he is cur­rently working with a CPA to appeal the tax increase to the local assessor and to the state.

“We’re going to go down the path at this point of having a CPA go to the local assessor and board to see if we can get tax decreases,” Jewell said.

The Fisk House is listed with both the national his­toric reg­ister and the state his­toric reg­ister, but not the Cold­water his­toric dis­trict, Jewell said. This allows him and his wife to control their property because it is indi­vid­ually owned, but there aren’t any ben­efits to being a his­toric place as the grants and monies allo­cated to city gov­ern­ments don’t reach them.

In the meantime, Jewell has applied for a demo­lition permit because, he said, “the property is more valuable as empty land.”

“We would hope he wouldn’t tear down the house as means to decrease property taxes,” Baker said.

Baker said he believes that getting rid of the house on the property would not have a sig­nif­icant impact on the taxes.

Rather than pur­suing potential demo­lition, Baker said he encouraged Jewell to go through the appeals process with the Board of Review, which would allow a com­mittee to review both the assessor and market data and look at cir­cum­stances of how the property would be valued, according to Baker.

“It’s essen­tially a check and balance for the local assessor,” Baker said.

Jewell said he has con­sidered estab­lishing a non­profit orga­ni­zation for the property, and is con­fident he could get approval from the federal and state gov­ernment to do so, depending on his goals.

“The problem is that the city would have to be OK with the loss of tax revenue,” Jewell said.

If the city were to fight it in court, Jewell could end up with sig­nif­icant legal fees, some­thing he would like to avoid.

But for Jewell, he doesn’t believe that the City of Cold­water under­stands the value of his­toric buildings.

“Unfor­tu­nately his­toric buildings don’t seem to mean too much to the city,” Jewell said. “What does mean some­thing to them is tax revenue.”

Baker said that the business and the building are an asset to the com­munity.

“It was lit­erally the only building in the area when US-12 was the main road from Detroit to Chicago,” he said.

Jewell said this project will be long-term, as they wait to see what will happen with the appeals.

“I’m going to try to keep this open, but I don’t want to keep getting taxed. There’s got to be a middle ground that we can all agree on.”

Jewell is pas­sionate about the sig­nif­i­cance of local busi­nesses in small-towns, but without a tax decrease, he says his business cannot survive.

“At this point, we’re slightly past breaking even,” Jewell said. “To con­tinue to succeed, we’re going to need the support of the local area.”

If the taxes go down, Jewell says he can stay.

“If the taxes increase, then we’re going to have more faceless buildings on this street.” 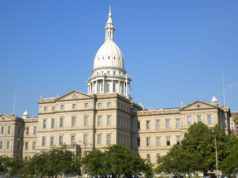 Michigan receives a ‘D’ grade in its accounting practices 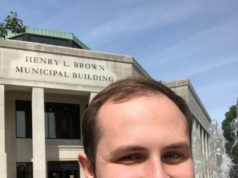