Grace Pfeifer cheered on her campers as they slid their fingers into each mountain crag, inching their way up its side. No matter how chal­lenging the route was, or whether they were climbing the upward or leeward side, Pfeifer always encouraged them to finish every climb.

This past summer, Pfeifer, a junior, worked as a res­ident assistant and rock climbing instructor for middle schoolers at The American School in Switzerland (TASIS), an inter­na­tional school. Pfeifer applied to the program because of a family friend and Catholic priest named Zachary Akers, who had con­nec­tions to TASIS, which was searching for a camp coun­selor and rock climbing instructor at the time.

“I knew that Grace had a great per­son­ality for the position and was very well-qual­ified, espe­cially given her back­ground in outdoor sports, espe­cially rock-climbing,” Akers said. “I wanted her to have this great expe­rience of working in beau­tiful Switzerland. I have been told that ‘trav­eling is the best edu­cation,’ and I have found that to be the truth also.”

Since many are inter­ested in this program, Akers told Pfeifer that obtaining this position wouldn’t be easy. TASIS chooses only around 20 to 30 coun­selors out of approx­i­mately 400 to 500 appli­cants.

“So I had the interview, it went well, and before I knew it, it was a reality,” Pfeifer said. “I was getting all my paperwork together for my work visa, and planning out what it’d be like to go overseas alone, without knowing anyone in a foreign country, and not knowing the lan­guage.”

The children at the camp attended fine arts classes every weekday from morning until 2 p.m. Once they were released, the instructors would pick up and drive the children that signed up for their respective “sports” tracks.

“The roads were so windy and every­thing is very tight in Europe. Space is con­served,” Pfeifer said. “It’s very moun­tainous. Just to get down to the city was a nightmare, going through these windy, steep roads.”

Pfeifer also had to adapt to the weather, which varied depending on location, and learned to copy others in wearing very thin layers.

“Italy has very wet, humid heat, and there are Palm trees, so it almost feels tropical. It was around 80 to 90 degrees,” Pfeifer said. “But then you look at the moun­tains and there’s snow up there.”

Pfeifer also dealt with a lan­guage barrier between her and her campers. The campers knew how to speak English, but they expressed them­selves to each other in their mother tongue, said Pfeifer.

“Crucial to impacting the kids was con­necting with them,” Pfeifer said. “Some­times you had to really question them when you noticed some­thing was up, because they weren’t ready to talk through it because of the lan­guage barrier.”

To work around the issue, Pfeifer visited the campers in their bed­rooms at night when they were bored and calm and felt more com­fortable speaking. She worked on building trust with them during the day, wanting the campers to know that she truly cared for them.

She got to know one par­ticular camper, an 11-year-old Russian girl named Sasha. Sasha lived across from Pfeifer’s room in the hallway and every day would tell Pfeifer of some dif­ferent injury she had. One day when Pfeifer walked into Sasha’s room, she found her panting heavily and exclaiming that she had a fruit allergy. Pfeifer ini­tially thought Sasha might be joking, but she took Sasha outside for fresh air and brought her a glass of water.

“She seemed to calm down, but this kind of went on for a little bit where she would find me and have some­thing going on,” Pfeifer said. “I kind of realized, she stopped doing this as much when I would check in on her. She was just really hungry for attention. All of these kids are from very priv­i­leged fam­ilies — since it was a very expensive camp — and they all had nannies and chauf­feurs. They don’t get a lot of contact with their parents and I just sensed lone­liness.”

After pro­viding Sasha the attention and care she lacked at home, Pfeifer noticed a big change with her. Before Sasha would only make it through a few rock-climbing routes, but by the end, she was always scaling routes until time was over.

Michaela Peine, a sophomore and Pfeifer’s current roommate, said the position was perfect for Pfeifer since she has a strong back­ground in rock climbing and helping children.

“She espe­cially loved getting to bring them hiking and bringing groups of them to church on Sunday,” Peine said about Pfeifer’s time in Switzerland. “She loves being out­doors, she has tons of expe­rience helping out with kids, and she’s just a won­derful, loving person, so I knew that this would be an incredible expe­rience for her.”

Pfeifer said it’s important to pursue an expe­rience like hers with an open mind.

“If you have any interest, first know your limits,” Pfeifer said. “Don’t let your reser­va­tions hold you back, if you do feel you are capable. It’s a very trans­for­mative expe­rience.” 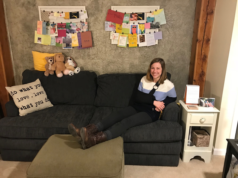 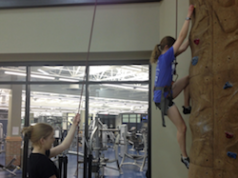