The Hillsdale Chargers’ season came to a end after their loss in the first round of the NCAA Division II tour­nament on Nov. 15. The Chargers’ goals for the season included having the best con­ference record, winning the con­ference tour­nament, and qual­i­fying for the NCAA tour­nament, all of which they accom­plished. Hillsdale was also gunning for a regional and national cham­pi­onship, but fell short.

“Of course, we want to win a regional and a national,” Gravel said. “We always aim high. If you come up a little short, it usually ends up being pretty good. But because we do aim high, it doesn’t feel any better if you don’t make that mark.”

The Chargers took on Drury Uni­versity in the first round of the NCAA tour­nament. Hillsdale started out strong, winning the first set of the match.

“I think the shock and awe of NCAAs kinda got to us a little bit,” senior right side hitter Paige Van­derWall said. “The first game we started out fresh but as the game went on we were unable to problem solve and strategize to combat their offense and defensive efforts.”

The Chargers ulti­mately fell in four sets to the Pan­thers. Drury was the top seed in the region and had home-court advantage.

“It seemed like we pulled back on the reins a little bit,” Gravel said. “Maybe let the sit­u­ation get the best of us. Our seniors, they were strong. It’s not like we were bad. We just weren’t playing our best at that point.”

The end of the season also marks the end of three Hillsdale vol­leyball careers: Van­derWall, Taylor Bennett, and Kara Vyletel.

“Every team falls back on their seniors and our seniors were incredible,” freshman outside hitter Maggie DePorre said. “Paige, we always knew we could fall back on her and she would get the point when we needed it. Taylor Bennett, she’s like our rock. Kara is our go-to player. The seniors are all very strong.”

A number of Chargers also received indi­vidual honors. Van­derWall was named the G‑MAC Player of the Year and Midwest Region Player of the Year by the Division II Con­ference Com­mis­sioners’ Asso­ci­ation. She was also named third team All-American by the American Vol­leyball Coaches Asso­ci­ation. This is VanderWall’s second All-American honor, and she joins two other Charger vol­leyball players in earning mul­tiple recog­ni­tions.

The Chargers went unde­feated against con­ference oppo­nents this season at 19 – 0, and won the G‑MAC regular season cham­pi­onship and the G‑MAC tour­nament cham­pi­onship for the second year in a row.

The Chargers have a slight break over Christmas, but Gravel pro­vides them with a sug­gested workout routine to ready them for spring training.

“That workout helps them come in more pre­pared and avoid injury,” Gravel said. “In January we start up and they can try to walk into that, but they’re going to be pretty sore if they fail to do any­thing.”

The team will put in the work in the winter, spring, and summer to prepare for the start of the 2019 season. 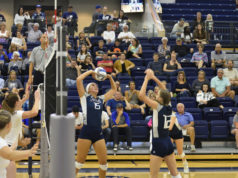