With two minutes and 15 seconds remaining in the fourth quarter on Sat­urday, the Hillsdale College Chargers trailed 19 – 14 in round two of the NCAA Division II playoffs against the Notre Dame College Falcons. Senior quar­terback Chance Stewart took the field at the Chargers’ 25 yard line, hoping to guide the team on a game-winning drive.

In 125 seasons of Hillsdale College football, the program had never advanced to the third round of the NCAA playoffs. Now, the Chargers were 75 yards and 135 seconds away from making history.

“The way this football team plays is full-on, and whatever happens, happens,” Stewart said. “We get knocked down, and we come right back up.”

The Chargers trailed 10 – 0 at halftime and took a 14 – 10 lead in the third quarter, but nine unan­swered points late in the fourth quarter by the Falcons set up a do-or-die final drive for Hillsdale.

“Over and over again this year you saw, if a little some­thing didn’t go our way, instead of folding up and crum­bling, we were right back up, throwing punches and right back at it,” Stewart said.

Earlier this season, on opening night, the team waited in the locker room for two and a half hours during halftime because of lightning before returning to the field to finish a gru­eling 14 – 9 win against Mer­cy­hurst Uni­versity on Sept. 1.

A short com­pletion sand­wiched by a pair of incom­plete passes began Saturday’s final drive, setting the Chargers up with a 4th-and‑2 sit­u­ation from their own 32 yard line and less than two minutes to go.

Against then-No.12 Ohio Dominican Uni­versity Stewart threw inter­cep­tions on Hillsdale’s first three drives on Sept. 15, but the Chargers stormed back in the final three quarters to shock their con­ference rivals on the road in a 34 – 18 victory. The win was the first in an unde­feated con­ference season for Hillsdale.

Under heavy pressure from the Falcons’ pass rush, Stewart scrambled to his right on 4th-and‑2 and, with defenders draped all around him, found freshman wide receiver Alec Foos for a five-yard com­pletion and a fresh set of downs.

On Oct. 6 against the Uni­versity of Findlay, the Chargers fell behind early, 10 – 0. But Hillsdale rallied to tie the game at 17 by the end of the third quarter, and a 51-yard, game-winning field goal by sophomore kicker Joe Philipp with less than two minutes left sealed a 20 – 17 victory.

Now at the Chargers’ 42-yard line, Stewart found junior running back David Graham for 19 yards to move the ball into Notre Dame ter­ritory on a 3rd-and‑6 play. But a holding penalty against Hillsdale set the Chargers back to their own 32 for another third down, this time a 3rd-and-16.

Unfazed, Stewart launched a pass down the right sideline for senior wide receiver Trey Brock, who leaped to make the catch at the Falcons’ 27 yard line for a 41-yard com­pletion and a first down.

On Nov. 3, the Chargers trailed Tiffin Uni­versity 19 – 17 at halftime in the game that would decide the G‑MAC champion. But Hillsdale outscored Tiffin 31 – 7 in the second half, and led by Brock’s four touchdown recep­tions, the Chargers fin­ished the con­ference schedule unde­feated and earned G‑MAC cham­pi­onship rings.

The Chargers faced 3rd-and-17 from the Notre Dame 34 yard line after another ques­tionable holding penalty. But Stewart found senior wide receiver Austin San­dusky cutting across the middle of the field for a 20-yard com­pletion to move the chains with less than 20 seconds to go.

In round one of the NCAA Division II playoffs, Hillsdale trailed Kutztown Uni­versity 20 – 6 at halftime after being held to one first down in the first two quarters. But the Chargers led before the end of the quarter and outscored Kutztown 34 – 6 in the second half en route to a 40 – 26 playoff triumph.

One week later, the Chargers faced 2nd-and-10 from the 14 yard line with seven seconds left in the game. Stewart took the snap and was flushed out to his right. He searched for the end zone, and for the final time in his illus­trious Hillsdale career, zeroed in on Brock. His throw was tipped near the goal line, however, and fell incom­plete past Brock through the back of the end zone.

The clock showed all zeroes, and the Falcons had sur­vived, 19 – 14. Hillsdale’s season was over in round two of the playoffs.

The Chargers were indeed used to getting back up and throwing punches. They didn’t stop doing so on Sat­urday. They simply ran out of time.

“I don’t think we left any­thing in the chamber,” head coach Keith Otterbein said. “That’s all you can do.”

Stewart fin­ished the game 17 for 36 for 322 yards and a 40-yard touchdown pass to Brock in the third quarter. Stewart also ran for a touchdown, a one-yard quar­terback sneak at the goal line, to get the Chargers on the board on their first pos­session of the second half. But it was Hillsdale’s final pos­session of the season that stuck with Stewart.

“The way our team fought, that last drive, that was the epitome of our team all year,” Stewart said. “We didn’t finish it the way we wanted to, but guys fought all year and I’m just really happy for them.”

Much like their first-round playoff game, the Chargers struggled to create any momentum on offense in the first half. Hillsdale did have one golden oppor­tunity to score in the first quarter after junior defensive back Drake Temple inter­cepted a pass and returned it to the Falcons’ 27 yard line.

But on 2nd-and-goal from the six yard line, Brock took a handoff on and end-around play and fumbled with a clear path to the end zone. Notre Dame recovered at the two yard line.

After two scoring drives put Hillsdale ahead 14 – 10 in the third quarter, the Chargers again moved the ball deep into Notre Dame ter­ritory by the beginning of the fourth quarter. But on 3rd-and-goal from the one yard line, Stewart fumbled on a quar­terback sneak after appearing to reach the ball over the goal line.

The call on the field, however, was a fumble, not a touchdown, and the Falcons took over while the Chargers came away empty.

Although the Chargers found some success in the air during the second half, Hillsdale never got the running game going, and accu­mu­lated neg­ative two yards on the ground in total.

“It’s always better when we establish a run game. For whatever reason, we didn’t quite get that going,” Otterbein said. “We tried to get some of the things that have been pretty good for us all year going, but that didn’t really work out.”

Notre Dame’s ath­letic defensive line played a part in that, and pres­sured Stewart all afternoon long whenever he dropped back to pass. Stewart was sacked six times.

“Just had to be quicker, be smarter, and had to make sure I was pro­tecting the ball in the pocket when I was moving around because there were a lot of bodies around me,” Stewart said. “We weren’t able to sustain any drives, so their d‑linemen were staying fresh. Once we were able to sustain drives, we were able to get the pressure off a little bit and get back into our rhythm.”

On defense, the Chargers col­lected a season-high 13 tackles for loss. Senior line­backer Jay Rose and freshman defensive lineman Kyle Parran accounted for three and a half each. Rose led Hillsdale with 14 total tackles, and Parran col­lected the Chargers’ only sack.

After allowing nearly eight yards per rushing attempt in the first half, Hillsdale’s rush defense tightened up in the second half. Senior defensive back Wyatt Bat­dorff said that was a result of Hillsdale’s defensive linemen focusing on plugging up the interior running lanes, allowing play­makers like Rose and Parran to make plays outside the tackles and in the back­field.

The Chargers finish the season 10 – 3, the most wins they’ve had in a single season since 2009, when they had an iden­tical record. That team also lost in the second round of the playoffs.

“It really is an honor and a priv­ilege to coach these young men. I absolutely have the best job in college football,” Otterbein said. “The guys I get to coach with, the insti­tution I get to rep­resent, it’s an incredible blessing to me. It’s dif­ferent than any­where else.”

Otterbein will be back for his 18th season as head coach in 2019, when Team 127 makes its debut. But for just a little while, he has an oppor­tunity to reflect on the special season Team 126 put together.

“Really proud of them,” Otterbein said. “It’s fitting that if this team was going to go out, they were going to go out swinging. Played right down to the end.” 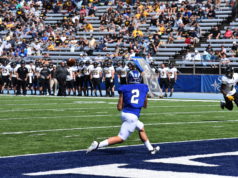