“It’s the People” is back in Hillsdale.

Due to the work of Ted Jansen, who started a cam­paign in Sep­tember to bring a mod­ernized vari­ation of the old City of Hillsdale welcome signs, a new sign wel­coming vis­itors to Hillsdale sits outside the Frank Beck Chevrolet on West Car­leton Road.

Jansen, along with the help of a team of stu­dents with A Few Good Men, installed the sign on Friday, which will not take the place of the signs installed by the City last year but sits as another welcome to drivers passing by on M‑99.

“People are very glad to have it back,” Jansen said.

Throughout the past two months, Jansen raised $800 for the sign with the help of nearly a dozen people. He said the fundraising went pretty well.

“Some people raised an issue that the sign might be con­tro­versial or political,” Jansen said. “So there were bar­riers, but we did it.”

Jansen said he worked with Stock­house Printing in Hillsdale to produce the sign.

A group of stu­dents with a com­munity vol­unteer out­reach program called A Few Good Men helped Jansen with putting up the sign.

Sophomore Nick Scovil, who was one of the stu­dents helping with the instal­lation, said in an email that putting up the sign was a lot of fun.

“Helping somebody in the com­munity as excited about it as Mr. Jansen made it easy,” he said. “Who better to put up a sign with that kind of motto than a bunch of college kids who took time out of their busy schedules to vol­unteer.”

Peter Haw­ersaat, also a sophomore with A Few Good Men, saw his helping put up the sign as a way of bringing the college and the city together, he said in an email.

“I’m only a sophomore, so I don’t remember when the town’s slogan was, ‘It’s the People,’ but I have noticed a general resentment at the change, almost as if the new slogan sig­nifies that the college is, in a way, swal­lowing up the town proper,” Haw­ersaat said. “I think the fact that stu­dents helped put up the sign might lessen some of the resentment and might be a step towards healing the rift between the college and town.”

Junior Car­oline Hen­nekes, another member of A Few Good Men who helped install the sign, said in an email that every time she will drive past the sign she will remember Jansen and his joyful nature.

“My growing grumpiness due to the cold didn’t stand a chance com­pared to Ted Jansen’s exu­berant energy and joy as we drilled, nailed, and sta­bi­lized the sign declaring, ‘Hillsdale: It’s the People’,” she said.

Several local res­i­dents expressed grat­itude and excitement at the sight of the sign after Jansen posted a photo of its com­pletion on the “Life in the Hills and Dales of Hillsdale County” Facebook page. On the page, Jansen expressed his “indebt­edness to all those who con­tributed to make this sign a reality.”

“But then after all, It’s the People that make this city a worth­while place to live,” Jansen said. 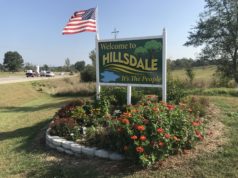 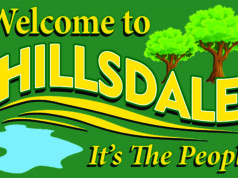 ‘It’s the People’ signs could return to Hillsdale