Did Aris­totle kill Alexander the Great? Asso­ciate Pro­fessor of History Kenneth Calvert asked during his lecture on campus.

On Thursday, Oct. 25, Calvert spoke about Alexander and his waning faith­fulness to his teacher Aris­totle, and the Greek ideals during his invasion of Persia. Calvert traced Alexander’s evo­lution from a young pupil of Aris­totle to the leader of an empire.

Calvert began by explaining that though Aris­totle was a teacher and philosopher, he did not limit himself to this sphere of influence.

“We often think of him as simply a philosopher, but remember that he’s also inter­ested in appli­cation,” Calvert said. “He is active polit­i­cally. You have to remember that when answering this question.”

From Aris­totle, Alexander absorbed many clas­sical Greek ideas about states­manship, political systems, and how to live a good life, according to Calvert. To think of Alexander as a “kind of a muscle-bound dimwit” is mis­guided, he said.

“This was an intel­ligent man,” Calvert said. “He had drunk deeply and well from Aris­totle. He had learned his lessons.”

These ideas would, however, soon fade from Alexander’s par­adigm as he began his invasion of Persia with the alliance of Greek city states called the “Corinthian League.”

After defeating Darius III at the Battle of Gaugamela, Calvert said, Alexander began to change.

“As they are moving further east, we see the trans­for­mation going on here,” he said. “Alexander seems to be getting soaked in Persian great king culture, breathing the air.”

Alexander would con­tinue to assim­ilate to ideas of Persian monarchy, which views leaders as being akin to gods, Calvert said. This would be a stark con­trast to Greek ideas of lead­ership, which emphasize mod­er­ation and wisdom, while rejecting the idea of a monarch being a god.

Alexander’s embrace of power would drive a wedge between the men.

“His friendship for the philosopher lost its original warmth and affection and this was clear proof of the estrangement which developed between them,” Calvert said. “Alexander begins to turn against Aris­totle and those very prin­ciples and virtues they had taught him.”

In order to answer his question, Calvert vaguely implied that Aris­totle may have been involved in Alexander’s death, by sug­gesting that the son of Aristotle’s friend Antipater may have delivered the poison which was rumored in those days to have killed Alexander.

“With the help of a man who knows med­icine and poisons and botany very well, Aris­totle, they may have killed this man who was simply getting out of hand,” Calvert said.

Senior Kelly Sul­livan found the lecture to be par­tic­u­larly useful in under­standing how phi­losophy can affect mon­archs and “the con­nection between Aristotle’s teachings and Alexander’s devo­lution.”

“I thought it was fas­ci­nating to see that phi­losophy in action and how it influ­ences kings,” Sul­livan said.

In answering the question of the lecture, junior Brian Freimuth found Calvert’s answer to be “entic­ingly plau­sible.”

Freimuth com­mented further on Calvert’s use of nar­rative in the lecture.

“He interwove it with a more general phi­losophy of despotism that demon­strated how want of humility inevitably per­verts the minds of even the most strong-willed rulers,” Freimuth said.

Regardless of the extent of Aristotle’s involvement in Alexander’s death, Calvert attributed much to their role in history. 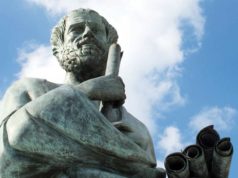 Challenging freshmen with Aristotle is ‘the Good’ 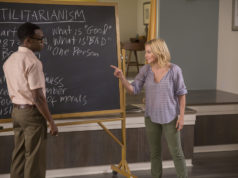