Tell me a little bit about your role at Jitters.

“I’m cur­rently the assistant manager of Jitters and will take over as manager next year after Alexander Green grad­uates. I work there eight hours a week three days a week, mostly in the morning.”

How did you start working at Jitters?

“I applied to Jitters during the second semester of my freshman year and started working there sophomore year, but I knew I wanted to try to get a job there from the beginning.  My brother came to Hillsdale, so I already knew about Jitters because a lot of his friends worked there. The atmos­phere was cool, and it just seemed like a really neat place. I liked the idea of being in the middle of the bustle and seeing everyone going to and from classes. I saw it as a way to get plugged into the campus com­munity. Plus, I’ve always wanted to work in a coffee shop.”

What drink is your per­sonal favorite?

“When I feel like treating myself, I make a caramel cin­namon iced latte. I’m from Florida, so I’m one of those people who’ll have an iced coffee no matter what time of the year it is.”

What’s the most popular item on the menu?

“Hon­estly, this is kind of uncanny because there’s not con­sis­tently any spe­cific thing, but we’ll notice from one day to the next that people will come in throughout the day and order the exact same thing as everyone else.  It’s as if the campus wakes up and decides as a student body what they’re going to get that day. One day it’ll be caramel mochas, the next day it’s chai tea lattes, and another it’ll be drip coffee. It’s like it’s in the air and everybody just feels it. It’s very strange.”

Are there any “secret” menu items people don’t know about?

“One of the most under­rated menu items is the honey cin­namon latte. I really like making those.  You steam the cin­namon into the milk and it wafts toward you and smells so good.”

Tell me about your most inter­esting cus­tomer expe­rience.

“We had this one guy who was doing con­struction work on the roads in town. He came to Jitters a few times to get a drink and would say some pretty bizarre things.  One time he ordered two hot choco­lates and told us, ‘Oh yeah, this other guy working con­struction is such a princess — just spit in. I’ll give you a hundred dollars if you’ll just spit in it.’ I didn’t know how to respond and was just thinking ‘I’m a broke college student, but I’m def­i­nitely not that broke.’ I kind of laughed it off but it was a really odd inter­change.”

What’s the hardest part about working at Jitters?

“It’d probably just be the fact that we have to get all our sup­plies from AJ’s, so if we run out of some­thing, someone has to get the cart and run all the way over to the union and bring it back. The dis­tance can make things stressful.”

“I like it for short amounts of time. It trains your problem-solving fac­ulties. If some­thing breaks down or if a cus­tomer has already paid for their drink and I can’t give it to them for some reason, I have to think if there’s some­thing else I can offer instead of the item they ordered. You have to think on your feet, which is a good skill to cul­tivate in general.”

What would you add to Jitters if you could?

“I think it’s nice to have handmade baked goods in Jitters.  Last year we had energy balls and for National Cap­puccino Day last week we had fresh cookies. I’d like to see us bring some of that back and make them a regular part of our selection.”

You recently started working at Penny’s as well.  How do Jitters and Penny’s compare?

“They’re com­pletely dif­ferent. Penny’s is more of a sit-down coffee shop envi­ronment whereas Jitters is fast-paced and everyone is moving through. I like the variety between them. It’s a good balance.” 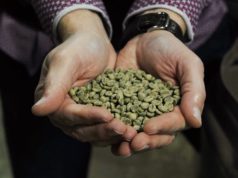 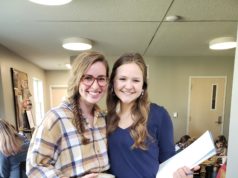 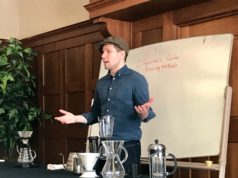 Learning the science of the perfect cup of coffee