“The core element of the company is about reducing carbon foot­print at a cost that saves the ecosystem money,” CEO of Michigan Hub, Glenn Foy said. “A key way to do that is pred­i­cated on this concept of com­bined heat power.”

Com­bined heat power aims to max­imize effi­ciency by using the excess heat gen­erated when natural gas is con­verted into elec­tricity.

“If you’re able to put the power plant in a location that allows you to sell elec­tricity directly to the indus­trial folks, and you can provide them with the waste heat, the effi­ciency of the plant goes up to 80 or 90 percent,” Foy said.

Michigan Hub was formed in Sep­tember of 2016 in order to buy and develop the Litch­field site, according to Foy. The site is Michigan Hub’s first project, but Foy said the company’s ambi­tions don’t stop at this one site.

“This is a scalable model,” Foy said. “We’re looking at other projects as well, but right now our big focus is on securing addi­tional tenants for the Litch­field site.”

The first business to plan on moving to the new park is Inde­pendent Barley & Malt, a com­mercial barley pro­ducer facility for craft brewers across the Great Lakes region, according to Michigan Hub’s website.

“The craft beer business is a very high-growth segment of the beer market,” Foy said. “They ended up coming to Litch­field because of our infra­structure.”

The company’s oper­a­tions require high levels of elec­tricity and heat. That these two needs can be pro­vided by Michigan Hub at a cheaper cost is the main reason the company chose to come to Litch­field, according to Foy.

“The syn­ergies were imme­di­ately clear – the oppor­tunity to access lower cost energy at an indus­trial site located in a thriving rural com­munity were critical to our site selection,” Inde­pendent Barley & Malt CEO Michael Cooper said. “We couldn’t be more excited to partner with Michigan Hub and build on the success of each other’s projects.”

In atten­dance for the ribbon-cutting cer­emony in Litch­field on Oct. 10 was Chris McArthur, who serves as Director of the Board of Public Util­ities in Hillsdale. He said the largest impact to the com­munity will be through the jobs this project affords, which will have an impact both through the energy plant and through the craft beer brewing aspects of the project.

“Anytime you can bring jobs to Hillsdale, I cer­tainly support that,” McArthur said. “I think it’s good for that project to go along.” 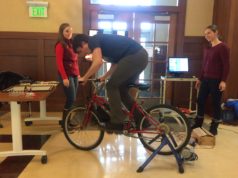 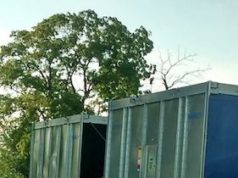