Eric Benedict, the new The Rockwell Lake Lodge chef, has turned the lodge’s restaurant into the only 100 percent Michigan-sourced kitchen in the state.

In May 2018, Benedict became the chef and Hos­pi­tality Manager of Rockwell Lake Lodge, which is a bed and breakfast owned and operated by the college and located in Luther, Michigan. Benedict brings his 9 years of expe­rience — from cities like New Orleans, Grand Rapids, and Chicago — to the small town of Luther. Benedict said the purely Michigan sourced kitchen has been a dream of his for some time.

“I’ve had this vision for years,” Benedict said. “But I knew it would only be pos­sible in a small-scale restaurant.”

The restaurant at the Rockwell Lodge is a rustic restaurant with some inter­na­tional and New Orleans styles sprinkled in. Benedict describes it as a “tra­di­tional French country-style restaurant.”

Luke Woltanski, a junior at Hillsdale College, was doing research at the bio­station in Luther, and had the oppor­tunity to eat a lot of the food Benedict cooked.

“I’d always see a big trailer full of plants,” Woltanski said. “I’d see them later in my salad or crushed up in the dressing.”

Benedict said the new oppor­tunity of serving the lodge’s vis­itors in the Lakeview Dining Room, which seats 30, has not come without its chal­lenges. In order to sustain a com­pletely Michigan-sourced restaurant, he some­times has to take ingre­dients out of his recipe.

“Ginger is one of my favorite ingre­dients,” Benedict said. “But since there is no Michigan-sourced ginger, I have to do without it.”

Benedict said the greatest chal­lenge is planning out the menu while con­sid­ering the resources available to him, as well as keeping ingre­dients fresh and in stock.

“I’ve put thou­sands of miles on my truck just from driving around Michigan and trying to track down the best sources of ingre­dients,” Benedict said.

For Benedict, a locally-sourced restaurant is important for a few reasons.

“We are at a point in our culture where people are so sep­a­rated from their food,” Benedict said. “People don’t know where their food comes from.”

Benedict said his mission is to connect ingre­dients with people. He also noted that Luther is one of the poorest areas per capita in the state, and keeping the money in the com­munity by pur­chasing locally-sourced ingre­dients helps grow the com­munity.

Over the summer, Woltanski had the oppor­tunity to spend a lot of time with Benedict.

“He’s the type of guy that can talk about a lot of dif­ferent things,” Woltanski said. “He always asked how we were doing and asked if we needed any­thing.”

Woltanski men­tioned that he and Benedict bonded over their mutual love for guitars, as Benedict used to work in a guitar shop.

Woltanski ate mul­tiple meals at the restaurant and said Benedict is as good a cook as he is a man.

“He put a lot of work into making sure every­thing looked good and tasted good,” Woltanski said.

One meal that Woltanski remembers in par­ticular was a salad with homemade dressing and chicken.

“I had four plates of food that night,” Woltanski said, “and I’m proud of it.”

One day while Woltanski was at the lodge, Benedict gathered him and a few other stu­dents to make them a meal. Benedict called it his “Summer BBQ” and together they all ate baked beans, salad, and ribs.

“Those were some of the best ribs I’ve ever had,” Woltanski said.

Aaron Tracey, director of hos­pi­tality oper­a­tions for the Dow Hotel and Rockwell Lake Lodge said that Benedict is ambi­tious and extra­or­dinary.

“We were quite lucky to find a chef who is tal­ented inside and outside the kitchen,” Tracey said. “Eric treats his guests like family.”

Tracey noted that being the hos­pi­tality manager is a big respon­si­bility and over the summer Benedict hosted over 1,500 guests.

“He handled it with grit and excel­lence, Tracey said. “He’s the perfect fit for the role, and it’s a joy to work with him advancing the mission of the college through hos­pi­tality.”

Benedict said that con­stant learning inspires him in his work.

“There are always new flavors to dis­cover, and the push to be better has directed my life,” Benedict said. “The con­stant quest for more keeps me going.” 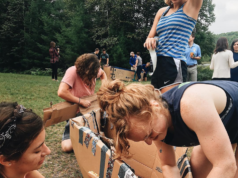 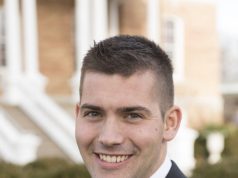