After trailing 37 – 24 at the half, the Chargers took the court deter­mined. The Chargers were out­re­bounded 19 – 13 in the first half, but they came back in the second with 15 rebounds to the Bulldogs’ nine.

“So far this year we haven’t been sat­isfied with our rebounding,” senior guard Nate Neveau said. “[Head coach John Tharp] did express his dis­pleasure with us at halftime. I think we responded, but to beat a good team we needed to play well for 40 minutes, not just 20.”

A three-pointer by Neveau started it all, as the Chargers closed the deficit to single digits, 57 – 48 with 9:57 to go.

With about eight minutes left, the Chargers went on a scoring run of their own, beginning with two made free throws by Behr. Behr snagged a rebound on the next play, getting the ball up the court to junior guard Dylan Lowry, who was fouled. It was his turn to score two more points, and he brought the Chargers within six points, 61 – 55. Both teams made a couple of trips up and down the court with no avail, but sophomore forward Davis Larson grabbed a rebound on Ferris State’s end of the court, got the ball to Lowry, who earned the assist when Behr made a layup.

The play seemed to be repeated, but this time it was senior center Czarnowski who grabbed the rebound and put the ball in the guard’s hands. Neveau passed back to Czarnowski under the basket for a Hillsdale layup. The Chargers were only two points away, forcing the Bulldogs to call timeout with six minutes left in the game.

A minute passed without scoring on either end until Larson got the ball and passed to Czarnowksi for another layup to tie the game at 61. The Chargers had scored 10 points in three minutes while holding the Bulldogs to zero.

As the clock wound down, Ferris took back its lead. With one minute left in the game, they earned a five-point lead at 70 – 65. Lowry shot two free throws to bring Hillsdale within three points. Free throws kept the Chargers in the game. They outshot Ferris 90.5 to 41.7 percent, however, this was not enough to give the Chargers the victory.

Ferris ended the game with one more shot to take the win, 72 – 67. The teams tied in rebounding, and Ferris led field goal per­centage, but not by much, as they shot 46.8 percent to Hillsdale’s 43.1.

Dylan Lowry led the Chargers in scoring with 15 points, six of which came from his free throws. Five shot 100 percent from the free-throw line, shooting at least two. Czarnowski and Neveau each added 13 points as well. Neveau’s speed and aggres­siveness earned him 10 rebounds, the most of any Charger.

“Every game, you know that the people you’re playing against are really tal­ented, if you don’t match them in intensity and effort, you don’t really have a chance,” Neveau said. “My high school coach had a very simple rule. Control the things you can control: attitude, effort and toughness. That really stuck with me and if you trust that, things will take care of them­selves.”

On Nov. 20 and 21, the Chargers played in the home Thanks­giving Classic tour­nament. They first took on the Uni­versity of Wis­consin-Parkside Rangers. They fin­ished with a 53 – 44 victory. The Northern Michigan Wildcats were next on the schedule. They outshot the Chargers 55.3 to 48.2 percent for a 80 – 68 victory.

Then on Sunday Hillsdale hosted a close game against Saginaw Valley State Uni­versity. The Chargers, who were missing the strength of two of their senior starters, fell to the Car­dinals 70 – 65. Czarnowski who has been dealing with an achilles injury all season was wearing a boot on the side­lines. Neveau only saw the court for 18 minutes due to a thumb injury. He usually averages nearly 36 minutes.

“When you have two of your starters on the bench it’s hard,” assistant coach Ryan Choiniere said. “Nate played but not for very long. We played pretty well and we think we’ve built a next-man-up kind of men­tality and the guys were ready to go, but we started fouling to much.”

The Car­dinals went to the free throw line 22 times in the second half, making 17 of them.

“It was def­i­nitely tough to play without them,” Behr said. “As a team we struggled offen­sively. I think we’re just working on a few things and fig­uring things out.”

These non-con­ference games are important for Hillsdale as it pre­pares the team for the post­season. Each of the teams the Chargers played last week are potential regional oppo­nents. This year’s Midwest region is made up of the G‑MAC, the GLIAC and the GLVC.

“We want to show that our league is com­pa­rable,” Neveau said.

“They’ll have a band, they’ll have stu­dents all over, it’ll be loud,” he said. “We’ll have to play with com­posure and not let that atmos­phere affect our play.”

On Sat­urday the Chargers will travel to Tiffin, Ohio, to play the Dragons at 3 p.m. Tiffin is also 2 – 3 this season. Hillsdale out­ranked both Cedarville and Tiffin in the G‑MAC pre­season coaches poll. Out of 13 schools, Hillsdale was ranked second, while Cedarville was seventh and Tiffin was voted ninth.

Behr said the team is looking forward to con­ference play. Hillsdale won both of its games against Cedarville last season but didn’t play Tiffin.

“We feel con­fident,” Behr said. “We know we didn’t play as well as we should’ve and 3 – 3 probably isn’t where we want to be, but we can focus on con­ference games from there.” 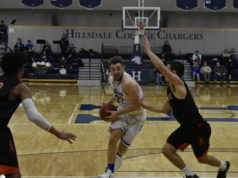