The Hillsdale Chargers had little choice but to grind through the mud during the G‑MAC Cross Country cham­pi­onship race.

“Morgan [Mor­rison] described it as running through mac­aroni and cheese,” junior Arena Lewis said. Mor­rison is a sophomore on the men’s cross country team.

Despite their efforts, the Chargers fell short, earning second place with 52 points. Walsh Uni­versity won the meet with 34, and Cedarville Uni­versity took home third with 54. Each school’s top five fin­ishers con­tributed to their team’s point total. There were 11 teams and 117 runners in the race.

“Leading up to the race I felt very excited and kind of nervous,” Lewis said. “I wasn’t sure if we were going to beat Walsh, but I knew we kind of had to.”

Sophomore Christina Sawyer was the third Charger to cross the finish line, taking eighth place in a time of 23:19.8.

A pack of Cedarville and Walsh runners fin­ished ahead of Hillsdale’s next pair of runners. Senior Ally Eads fin­ished in 19th place in 24:06.6 and sophomore Lauren Peterson was 20th in 24:07.1.

“It was just really hard for me to be com­pet­itive,” Eads said. “A lot of it was just excuses in my head. I didn’t feel men­tally engaged. I just felt like I was trying to finish the race and I couldn’t get into a rhythm.”

Chargers described the race as a battle just to finish rather than a com­pe­tition for first place.

“It felt like there was so much effort just to run and not walk,” Lewis said. “It didn’t feel like a race, it was more like trying not to fall.”

Lewis did, however, end up falling around the second mile mark. It rained the entire week prior to the race, resulting in such muddy and slippery con­di­tions.

“It was def­i­nitely tough,” assistant coach R.P. White said. “I thought we didn’t have the best race of the year and that’s what was going to have to happen in order to win.”

White is still looking forward to the regional meet.

“I’m looking forward to having the home-course advantage that Walsh had at G‑MACs,” he said. 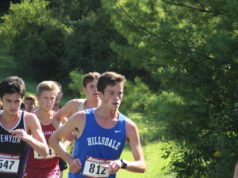 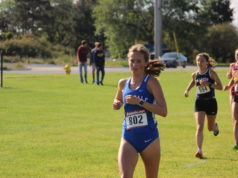 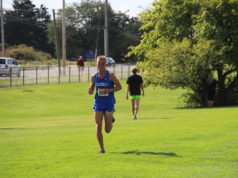