Last week a freshman wan­dered into the Writing Center and we fell into a con­ver­sation about how she was enjoying her time at Hillsdale. Sometime later, she men­tioned getting ice cream in AJ’s and feeling ter­rible about it. When I protested, she said some­thing vague about how everyone else was studying and com­plaining about how much work they had.

Good Lord, I thought, freshmen feel like crim­inals when they have fun?

But the more I thought about it, the less sur­prised I was. Whenever people have fun, we wring the joy out of their smug faces by treating them to laundry lists of our problems. Mean­while, we fluff our little egos, assuring our­selves that we are living our best, most mis­erable lives.

To set the record straight: I don’t mind com­plaining if it expresses pure, unadul­terated misery. I don’t like lis­tening to it, but at least it’s honest. My problem is with a spe­cific type of com­plaining that isn’t actually com­plaining at all. It’s bragging dis­guised as com­plaining — an odious cousin of the “humble brag;” but instead of a false modesty, it’s a false misery.

Take a walk during hell week — or really anytime at all — and you’re almost guar­anteed to overhear stu­dents com­peting over who is suf­fering the most. The con­ver­sation always goes some­thing like this:

“If it makes you feel better (it probably won’t) I haven’t slept for two days. I don’t even remember what sleep is.”

“I feel that. I have to write six by Friday.”

Some­times it seems like we can’t let anyone have a bad day without first rubbing their noses in how we are having a worse one.

Some­times we need to com­mis­erate about our col­lective misery. Sadly, the best way to do this is to com­plain.

Sym­pathy is the grease that keeps stu­dents func­tioning when they need to crank out papers and cram for exams. If one out­lawed venting and com­plaining, the student union would be crush­ingly silent during finals week, and stu­dents would trundle around glow­ering in mute frus­tration.

It can remind the lis­tener that even the seem­ingly-perfect student is human as well, and that no one on this campus is unique in having problems to sort out. As sleep-deprived stu­dents attempt to ease the woes of studying with other people’s sym­pathy, the last thing they need is to hear more com­plain-bragging.

I’m not asking Hillsdale stu­dents to stop com­plaining. Goodness knows I’d make it about a day before breaking down. All I ask is that people stop bragging about their misery.

Brag­gado­cious whining makes you feel better, and it invariably makes the happy, healthy, sane lis­tener feel worse. If you are feeling spiteful, this is almost as good as being happy, healthy, and sane.

This is the kind of whining that is prob­lematic. The rest is a rel­a­tively harmless waste of air.

Com­plaint-bragging is not a problem unique to Hillsdale. It’s a problem with everyone, every­where; but it’s is becoming an pan­demic on this college campus. Things are getting out of hand when ice cream breaks become furtive guilt trips.

There’s a thin line between com­mis­er­ation and conceit. Com­mis­er­ation builds com­munity, but it requires lis­tening and honesty. Conceit tears it down and drives people into iso­lation and shame.

Misery does love company. But I say we need to put it in time-out, or at least make it play alone more often. We’d be better company, and maybe then our freshman could eat their ice cream in peace. 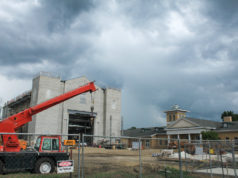 The Weekly: Stop complaining about the chapel