When Tyler Blanski ’06 was a student at Hillsdale, Matthew Gaetano, pro­fessor of history and fellow student, said that Blanski probably didn’t see himself writing mul­tiple books, including his latest, “An Immovable Feast: How I Gave Up Spir­i­tu­ality for a Life of Reli­gious Abun­dance.”

But Blanski said he remembers Gaetano’s words that he had a truly “liberal mind” and would go places. As a slow learner, Blanski said the praise from an accom­plished student whom he respected had a pro­found effect.

“It changed my life,” Blanski said “It gave me the fuel I needed to keep going.”

Arriving at Hillsdale as a freshman, Blanski was a self-pro­claimed hipster who sported dread­locks, had a job at an organic food co-op, and had recently grad­uated from a pro­gressive school for artists in Min­neapolis. He said that on his college visit, he was instantly enchanted, having never seen any­thing like it. The idea of a Western her­itage, some­thing inherited, was com­pletely new to him.

When he was in Pro­fessor of History Bradley Birzer’s Western Her­itage course, Blanski said he noticed that Birzer talked about Catholics as if they were common, drawing from Blanski an une­d­u­cated response that Catholicism was a thing of the past. Birzer leaned against his desk and engaged Blanski in con­ver­sation.

“He so patiently lis­tened to me in my igno­rance,” he said. “Dr. Birzer changed my life.”

Birzer said he remembers that Blanski had courage and engaged well in class.

“When I needed someone to discuss some­thing, he would take chances,” Birzer said. “That’s the mark of a good person.”

Blanski records his time at Hillsdale in “An Immovable Feast,” which recounts his con­version from an Evan­gelical to a Catholic, a journey influ­enced by his edu­cation as a religion major and the exposure to dif­ferent facets of Chris­tianity at Hillsdale.

“I think Tyler exem­plifies this sort of neo­pla­tonic ascent,” Gaetano said, “Where he’s always looking for some­thing, falling in love with books, with girls — and then, of course he is now married with children, so that had its own tra­jectory. But that led him to this deep under­standing of union with God, and he never gave up on not just edu­cating himself and on a lifetime of learning but on a search for wisdom.”

This insa­tia­bility shows in his many cre­ative endeavors. Not just a writer, Blanski has founded a record label and recorded a folk album. He wrote most of the songs alongside fellow student Patrick Whalen while still at Hillsdale. After college, he helped publish a couple mag­a­zines in Min­neapolis.

Post-grad­u­ation, when Blanski was a hipster in tight jeans (when they were still cool, he adds), Blanski started dating Brittany, to whom he is now married. Though Tyler was “a product of Hillsdale” while Brittany was a polit­i­cally-active liberal and not a Christian,

Blanski told his sister he needed to date a girl and found that his whole family thought he and Brittany would be perfect for each other. He called her. They made dinner and read poetry.

“It was common and weird and beau­tiful,” he said.

Learning more about the Anglican church, Blanski studied for ordi­nation as an Anglican priest, learning about the church fathers and the Christian tra­dition, when, just as he was about to be ordained as a dia­conate, he and Brittany chose to convert to Catholicism, leaving him with no career plan. Now he’s “entrenched in business,” he said.

With his writing, he said he didn’t wonder about how well it would be received, and, while he’s honored by the success, he didn’t antic­ipate it. He said that all that matters when writing is whether it com­mu­ni­cates clearly and encourages people who are suf­fering.

“When I was writing “An Immovable Feast,” I had this dream that someone at Hillsdale is cozying up with it in their dorm room,” he said. “If it changes the way they go to Mass, drink a beer, or even the kind of high­lighter they use, I would die happy.  But I think I would want to make a few more babies first.”

Gaetano said while he was per­sonally studying in graduate school to be a writer and scholar, Blanski wrote a couple books, making intel­lectual devel­op­ments outside of school.

“That the kind of courage that it took for him to think out loud in public is some­thing that I didn’t have,” he said, “and I don’t think I have now.”

He expressed appre­ci­ation for the way Blanski has led his life since Hillsdale.

“I can see that kind of restless, boundless spirit seeking rest,” he said, “this kind of spirit of a lover, can only find at least a taste of that rest in the deep­ening of his faith.” 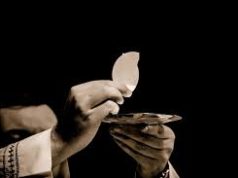