If you read a Col­legian issue from 1918, half of the articles would be cov­erage of World War I. Now, 100 years after the end of the war, the names of those who served, including seven who died, have been mostly for­gotten.

Of the approx­i­mately 500 stu­dents on Hillsdale’s campus in 1919, 368 enlisted in the armed ser­vices, Red Cross, YMCA, or YWCA. One hundred and fifteen were in active service overseas, while 109 were in the Student Army Training Corp (SATC).

“The part which Hillsdale College played in the war cannot be mea­sured in men and women,” an April 1919 article of The Col­legian said. “The spirit which sent them will con­tinue to move and work among us, influ­encing every Hillsdale student to bigger and better things.”

College archivist Linda Moore said stu­dents and faculty alike did a variety of things to help the war effort.

“A couple of college girls had gone over in a version of the United Service Orga­ni­za­tions, enter­taining the troops,” Moore said. “There were a variety of ways that people served, but not nec­es­sarily in the mil­itary. There were people here who helped train troops to go over. There weren’t a whole lot of guys on campus.”

The U.S. Army created the SATC to train young men for mil­itary action. While par­tic­i­pation in the SATC was com­pletely vol­untary, enrolling gave the indi­vidual the rank of private and the ability to be called into active duty. The SATC was active at 525 edu­ca­tional insti­tu­tions.

“The gov­ernment looks to the college men of the country for its leaders,” an Oct. 13, 1918 issue of The Col­legian said. “The SATC can train them for entrance into an Officers’ Training Camp, where their training may be fin­ished. This is an oppor­tunity for advancement that will not come to those who remain at home and wait for the draft. Hillsdale College is to be con­grat­u­lated on the fact that it has been selected as one of the col­leges where this important work will be carried on.”

The War Department announced in August 1918 that a unit of the SATC would come to Hillsdale. Lt. Arthur S. Bell was appointed as com­mander of the Hillsdale unit. The SATC bar­racks were on Manning Street at the shoe factory, an off-campus house.

“When the stu­dents on campus went to look for some member of the faculty to help them with their mil­itary drills, the only faculty member with any mil­itary expe­rience was Melville Chase. He fought in the Civil War,” Moore said.

“At the same time, there was the flu epi­demic of 1918,” Moore said. “Two of the guys that were in the Student Army Training Corp died in the bar­racks from the flu. That was another thing that was going around at the same time.”

At Kelly’s funeral, Lt. Bell made his remarks. He said that while Hillsdale would honor all the men who had given their lives in service of the United States, Kelly’s death would be a per­sonal one.

“As a member of the S. A. T. C, ful­filling faith­fully the duties assigned to him, Private Kelly gave himself to Hillsdale and to his country,” Bell said, according to the Dec. 26, 1918, issue of the Col­legian. “And although not a student here as long as others, who have learned to love old Hillsdale and the ideals for which she stands, we feel that he com­pre­hended the meaning of the words of our Alma Mater:

‘When the world’s hard fight is over

And life’s end draws nigh

May those colors gently hover

Then to eyes that see the glory

According to the April 24, 1919, issue of The Col­legian, seven stu­dents died in the war effort.

“There are seven gold stars on the college service flag, rep­re­senting the seven men who have given ‘their all,’” an April 1919 article said. “To many of the present student body to whom they were well known, their sac­rifice comes par­tic­u­larly close. We cannot help but feel some of the patri­otism which inspired them to give their best up to the last.” 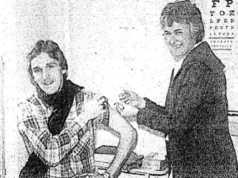 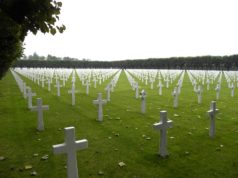 Trump should visit the Meuse-Argonne Cemetery 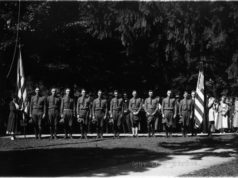