This year marks a full century since the 1918 worldwide influenza pan­demic, during which four World War I Hillsdale student draftees came down with the flu.

That epi­demic was not the worst Hillsdale has seen, however. While the college was not widely harmed by this out­break of the H1N1 influenza virus, it was severely affected by an out­break of the Russian flu in 1978.

An October 31, 1918 issue of The Col­legian credited the flu’s absence to the college’s careful health safe­guards.

“The college has been par­tic­u­larly for­tunate in escaping the epi­demic. This has been due in large part to the pre­cau­tions taken by the stu­dents and faculty in not holding any unnec­essary meetings.”

Although college stu­dents for the most part avoided catching the flu in 1918, the flu pre­vented the college’s ath­letic teams from par­tic­i­pating in events with other col­leges. According to the 1919 issue of the Hillsdale Winona Yearbook, when “the epi­demic of ‘flu’ came along … many of the col­leges can­celled all games, leaving us with no games to play.” According to Linda Moore, “A number of stu­dents got it at home or in the army and didn’t come back, so it did cause a dis­ruption for the college.”

Hillsdale stu­dents in the armed forces were affected by the flu as well. After entering WWI, the U.S. gov­ernment created the Student Army Training Corps (S.A.T.C.) in 1918 with the intention of forming a mil­itary unit in every college capable of pro­viding 100 mil­itary-age men, even­tually gath­ering draftees from a total of 157 col­leges and uni­ver­sities. The bar­racks of the Hillsdale S.A.T.C. unit were located at the old Shoe Factory on Manning Street, and a flu out­break in the bar­racks impeded the dis­charge of Hillsdale’s (S.A.T.C.) unit.

“Dr. Sawyer, who is the con­tract surgeon for this post, pro­nounced four cases to be influenza,” The Col­legian reported on Dec. 12, 1918. “[D]emobilization and the mus­tering of the men out of the service will be held up indef­i­nitely until the influenza has been entirely wiped out.”

Hillsdale expe­ri­enced a much more serious bout of the flu during the Russian influenza in 1978. In 1977 this virus spread throughout the world but no one was able to trace its origin. It was first rec­og­nized in Russia, giving it its name, but many sci­en­tists suspect the pan­demic actually started in China and affected people mostly under the age of 25. Hillsdale’s physician at the time, Charles Vear, esti­mated had affected 70 percent of the student body.

“Hillsdale College fell victim to a potent flu virus last week that even­tually inca­pac­i­tated the majority of its college stu­dents,” The Col­legian reported on Feb. 23, 1978.

Sara Van Camp, the director of the Student Health Service in 1978, told The Col­legian that health service employees had been seeing 50 – 70 stu­dents per day and that they had added an extra two nurses to handle the overflow of sick stu­dents. The Aca­demic Dean’s office also told The Col­legian that class absences had increased sig­nif­i­cantly.

“A number of stu­dents were quar­an­tined and the college was taking food to them instead of them being out at the dining hall,” Moore said.

“Colds and flu forced 14 members of the Hillsdale [track] squad to stay home and allowed the Miami trackmen to dom­inate the meet,” Hillsdale’s Alumni Mag­azine reported on April 1, 1979.

Regardless of the other out­comes, the 1918 epi­demic didn’t stop homework.

“Prof. Harry Mack is a victim of the second flu epi­demic,” The Col­legian reported on Dec. 19, 1918, referring to the Hillsdale’s second out­break. “Though stu­dents had a vacation from his class, the assign­ments posted in his room kept them busy in the library. If only he could have seen us!” 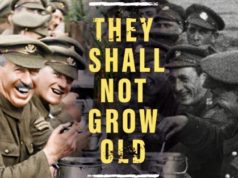 ‘In their own words’: WWI documentary breathes life into old footage 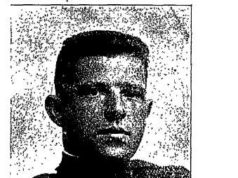 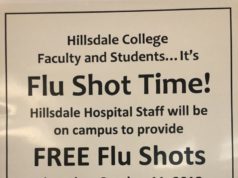