Play­wright Elihu Winer may have released his newest pro­duction “Anatomy of a Murder” in 1963, but its story began long before.

Ten years prior, a local lieu­tenant sta­tioned in Big Bay, Michigan mur­dered the owner of a nearby bar on the grounds that the owner had raped his wife. The state brought the issue before the court, but the local judge fell sick before the case could begin. They soon hired Judge Charles O. Arch from Hillsdale County.

Arch accepted and planned to spend his extra time in the Upper Peninsula at his cottage fishing in Big Bay. The lieutenant’s defense attorney, John Voelker, later made the trial into a novel, which was later turned into a popular film and even­tually a play.

Starting next week, the Sauk Theatre will perform “Anatomy of a Murder,” bringing this local story to a local stage.

The directors and actors of the show expressed excitement about bringing the story to life, as it chal­lenges the audience with issues that remain prevalent today.

“It has a lot of rel­e­vance to what’s going on in today’s world,” said Trinity Bird, exec­utive director at the Sauk. “The pros­e­cutor [in the play] raises the question at one point if the defendant’s wife was actually assaulted, and that sounds like it came right from CNN or Fox.”

Not only an oppor­tunity to learn Michigan history and grapple with rel­evant issues, the play is also just plain enter­taining.

“Not to give too much away, but there’s some­thing that happens at the very end of the play that you just don’t see coming,” Bird said. “That’s just good writing.” 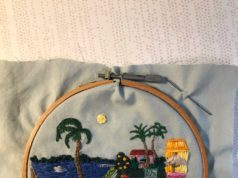