With a gloomy forecast pro­jected for the weekend, a clear, star-filled sky came as a joyous sur­prise to the Outdoor Adven­tures Club who went camping over fall break.

The annual Sleeping Bear camping trip hosted by the Outdoor Adven­tures Club took 26 Hillsdale stu­dents to Lake Michigan at the Sleeping Bear Dunes. Most of the campers spent the entirety of their fall break on the trip.

“That night while we were making dinner the sky just cleared and the moon became really bright,” junior Danae Sollie said. “We thought it was going to be rainy all night but then it was the most beau­tiful night.”

Freshman Sonya Wirkus said the evening was the best moment on the trip for her.

“You’re laughing with your friends but then you become quiet and you’re just looking at the stars,” Wirkus said.

Stu­dents were at liberty to do as they pleased during the trip, whether hiking or exploring the nearby Tra­verse City.

“It was really nice to not have a schedule,” Wirkus said. “You can do what you want and put aside school-related things.”

This freedom lent itself to com­munity bonding on the trip. Days usually began with one indi­vidual telling the rest of the campers their plan to go on a hike or scenic drive, and an impromptu group forming.

Cooking by the campfire also proved to be a way of bonding.

“Not everyone knew each other but by the end there was def­inite com­munity,” Sollie said. “There’s some­thing about making food over a campfire that is really bonding.”

Time around the campfire was spent exper­i­menting with a Dutch Oven, making apple crisp, cooking chili, and telling stories.

“We were just trying to figure things out,” Sollie said. “It was an adventure just to make dinner.”

For junior Ella Williams, the trip pro­vided a chance for a break but also a dif­ferent way of living.

“It was nice to get away and be in nature,” Williams said. “We watched a lot of stars and sunsets.”

Sollie said the moti­vation behind the trip was to give relax­ation and rest for the stu­dents, as well as an adventure.”

“It’s kind of cool because people are from so many dif­ferent areas of the country,” Sollie said. “For a lot of people, it was the first time seeing Lake Michigan or a Great Lake.”

“Nothing is ready for you in camping,” Williams said. “You have to do every­thing yourself. It was a dif­ferent way to live.” 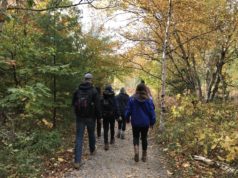 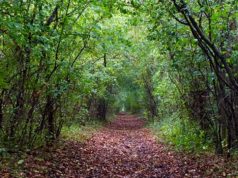 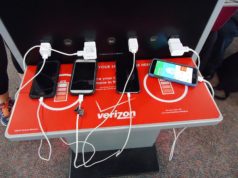