After beating Simpson in Mock Rock but falling short of ending its 7‑year home­coming reign, off-campus house res­i­dents con­tinue to “make spaces into places,” per their home­coming coalition motto.

The men of Bjornheim — juniors Dietrich Bals­baugh and Joshua Pautz, and sopho­mores Marcus Lotti and Dominic Bulger — began planning their home­coming group over the summer, speaking with each other weekly about plans for the banner and video. Over 13 houses joined for the Off-Campus Coalition’s first meeting, including The Halfway House, Bjornheim, The Jungle, Brooklyn, The Igloo, The Womb, and The Love Shack. Though home­coming is long gone, the OCC lives on through group study ses­sions, meals, and weekend gath­erings.

Senior Sammy Roberts, who lives in Wessex, said that OCC’s impact has been greater after home­coming than during.

“It’s not so much what we’ve done, but how much we’ve con­tinued to develop friend­ships after home­coming week,” Roberts said. “It allows indi­vidual people to make friend­ships with others that they wouldn’t have known oth­erwise. It serves its purpose when it’s not an end in and of itself, but when it leads people to the proper end, which is the friend­ships.”

Bals­baugh, who coor­di­nated the OCC’s efforts, said that the group quickly became a label — the opposite of its original purpose.

“I was caught com­pletely off guard by how fast everybody attempted to insti­tu­tion­alize the OCC, but it is not an insti­tution,” Bals­baugh said. “I got a lot of ques­tions of how to join the OCC, and how to be on a team for home­coming, but the point of the week was to show that we are some­thing as a com­munity.”

Now, over a month after home­coming weekend, the Off-Campus Coalition con­tinues to grow as a com­munity. Berntson and Bals­baugh said they text daily about going to dinner and studying together, and the group remains close with a group chat, which now has almost 50 members.

“It ended up as an odd con­glom­er­ation of people, but at the same time, it’s awesome,” Bals­baugh said.

The OCC high­lighted the off-campus com­munity that has been around for a long time, according to Bals­baugh.

“One of the cool things about the home­coming video is that a lot of alumni loved it,” Bals­baugh said. “They remem­bered their houses, and we wanted to show campus that it’s been around for a long long time.”

Senior Nick DeCleene said he had expe­ri­enced a greater con­nection with other stu­dents who live off campus than ever before after joining the OCC.

“The OCC gave us a more inten­tional way to reach out to other people off campus,” DeCleene said. “It’s what I thought off-campus would be, but it hasn’t been until this year. It has been a really ful­filling com­munity.”

DeCleene expressed the dif­fi­culty of moving off campus — specif­i­cally, the lack of fel­lowship that Hillsdale’s dorm culture pro­vides. But he said that changed when he joined the OCC.

“It is really hard living off campus some­times, but we are a com­munity and that’s some­thing worth cher­ishing,” DeCleene said. “You know all these people, you smile and say hello. The OCC brought a bunch of dif­ferent people from cool and unique back­grounds together.”

The OCC’s post-home­coming gath­erings have included parties at Boon­docks and Graceland before walking together to Garden Party, brunches, and Poetry Sat­urday at The Halfway House, as well as more random get-togethers, dinners, and study breaks. Recently, Senior Emilia Heider went to Bjornheim to make bread for a house­warming party.

“It’s all about hos­pi­tality, and it’s a little easier to have people over because we have shared a bond,” she said.

Bals­baugh empha­sized that the OCC is not an insti­tution or a club, and that all are welcome par­tic­ipate in their com­munity. 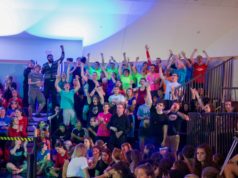