“Hold the Dark” is a self-ful­filling psy­cho­logical thriller that leaves the viewer torn between the impulse to embrace its beau­tiful pre­sen­tation and to recoil in horror at its chilling subject matter.

Though both the film and the book on which it is based are set in the wilds of Alaska, “Hold the Dark” was filmed in Canada and Morocco.

“There was not a single green screen on this set the entire film,” said director Jeremy Saulnier at a question and answer session at the 2018 Toronto Inter­na­tional Film Fes­tival. The wild land­scapes are properly awesome, and moun­tains, frozen lakes, and forests fre­quently dwarf indi­vidual char­acters. Nature is both beau­tiful and cold in “Hold the Dark,” com­pletely neutral to the horrors which her inhab­i­tants may commit — which is the drama of the film (warning: spoilers ahead).

When her young son is reportedly taken by wolves, Medora Sloane (played by Riley Keough) pleads with behav­ioral sci­entist Russell Core (Jeffrey Wright) to track down the guilty wolf. She harbors no false hopes her son is still alive, but wants “some­thing to show” her husband (played by Alexander Skarsgård) when he returns from his tour in the Middle East.

Having spent a year among wolves, Core is at home in both human and animal worlds. He does indeed track the boy’s killer — who proves to be Medora herself, not a wolf. Vernon Sloane returns at the news of his son’s death and hacks a bloody trail through the Alaskan wilderness tracking down Medora, while Core and local law enforcement scramble to get to her first.

Unlike Jeremy Saulnier’s pre­vious films, “Hold the Dark” lacks a tight, coherent plot. The horror of this film is not “what hap­pened” but “why.” Saulnier relies heavily on a cohesive aes­thetic, com­bining every­thing from wooden wolf masks to mon­strous moun­tains to flick­ering fire­light to immerse his viewer.

While Wright called the script “one of the most descriptive and lyrical and evocative” he’s ever been given, the film goes the under­stated route, using quality more than quantity of speech. Dia­logue is often minimal or choppy, usually whis­pered or growled. Many scenes are left without a sound­track, mim­icking the near-com­plete iso­lation of Alaskan wilderness.

When Saulnier opts for music, the sound­track never cushions any­thing; instead, it sharpens the emo­tional expe­rience, using growling cellos or prim­itive chanting, acting much the same as the stark beauty of the natural land­scape.

Vio­lence forms the basic vocab­ulary of “Hold the Dark,” as the first scenes portray the implied capture of the son by a wolf and the graphic knifing of an American soldier whom Vernon stumbles upon raping a native woman. Whether irra­tional or just, vio­lence is the uni­versal means to par­ticular pur­poses.

A gory gun­fight con­sumes about half an hour in the middle of the film, as the one friend Vernon has gives him a head­start on pur­suing his wife by poking a machine gun out of his attic window and slaugh­tering the local police department. But the viewer’s initial horror is quickly numbed. The viewer quickly becomes a detached bystander, inter­ested only in outcome and not in casu­alties.

“Hold the Dark” is true to its name; it teems with darkness, both physical and moral. I punched my brightness key probably 17 dif­ferent times just trying to discern the scenes lit only by fire­light, which gives a prim­itive feel and ghost-story atmos­phere.

Darkness is both within and without, as Medora says: “Do you have any idea what’s outside those windows? How black it gets? How it gets in you?” Saulnier exposes the irra­tional forces that drive these char­acters by refusing to give a neat expla­nation for the horrors they commit.

Both science and myth, rep­re­sented by the behav­ioral sci­entist Wright and a local native American Indian woman (played by Tantoo Car­dinal), fail to give closure to the horrors com­mitted in this movie. The best answer Wright and the sheriff can give for Medora mur­dering her son is that she wanted to “save him from…darkness. In her. In him. Outside her window.”

Indeed, outside the sheriff’s kitchen in this scene is the impen­e­trable Alaskan night. Despite the night outside the window that frames Wright and the sheriff, this is hardly a suf­fi­cient invo­cation of sym­pathy for Medora. The audience is left without a sat­is­fying expla­nation for her actions.

Against the vil­lagers’ belief that Medora is pos­sessed by the spirit of a wolf, Wright help­fully points out that wolves eat their own too; we witness them devouring one of their own in an early scene. “In behav­ioral terms, sav­aging,” he said.

Though the sheriff con­de­scendly remarks “I’m not talking about animals here, Mr. Core,” his comment rings false. The barrier between man and animal is as thin as the plywood walls of the little Alaskan outpost huts. The audience bears witness to the human capacity for evil against the sheriff’s tes­timony and our will. In “Hold the Dark,” both man and animal kill and spare without reason, under­scoring the lack of any under­lying law of man or nature.

“Hold the Dark” opens to belly growls of cellos and a quote from poet Gerard Manley Hopkins’ “Wreck of the Deutschland:” “O unteachably after evil, but uttering truth.”

Unlike the Jesuit poet, who por­trayed the hope that a nun found in suf­fering while being drowned at sea in a snow­storm, we get neither intel­lectual closure or hope from “Hold the Dark.” Man is “after evil,” unteachable by science or by myth. 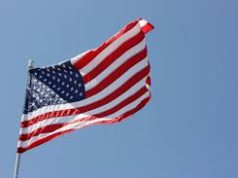 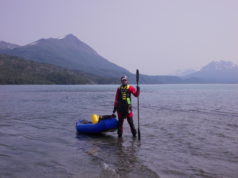