Fol­lowing a 2017 – 18 influenza season clas­sified as “high severity” by the Centers for Disease Control, Hillsdale Hos­pital is hosting a free flu-vaccine clinic in the TV room of Hillsdale College’s Grewcock Student Union this week. The hos­pital has offered the service annually for about four years.

From 11 a.m. to 1 p.m. on Thursday, five or six nurses will admin­ister approx­i­mately 450 influenza vaccine shots, according to Randy Holland, the infection control nurse at Hillsdale Hos­pital. The clinic will cost the hos­pital about $7 per shot, not including the expense of the nurses and other staff who will be running the clinic.

But Holland said he hopes the cost of the clinic will be paid off in better public health, although the effec­tiveness of the vaccine can vary.

“We’re trying to get more in the com­munity vac­ci­nated,” Holland said. “The more that are vac­ci­nated, the better it will be.”

Holland said the number of people taking advantage of the free vac­cines at the college’s clinic has risen from around 300 to 450 over the last three or four years.

In Hillsdale County, 1,368 cases of influenza or influenza-like illness have been reported from October 2017 to Aug. 30, 2018, com­pared with 1,525 cases in the same range the pre­vious year and 724 cases the year before that, according to Yvonne Atwood, director of per­sonal health and disease pre­vention at the Branch-Hillsdale-St. Joseph Com­munity Health Agency.

If all influenza cases were reported, the numbers would be sig­nif­i­cantly higher, Atwood said.

Last year’s influenza vaccine was about 38-percent effective, and “not the greatest,” Holland said.

Nationally, the CDC reported a severe flu season: Influenza-like illness reached 7.5 percent last year, the highest per­centage since 2009. According to the Michigan Department of Health and Human Ser­vices, influenza-like ill­nesses in Michigan ran above base level for 15 weeks and peaked at 5.9 percent.

The vaccine developed last year tar­geted the dead­liest strain of the flu virus, but didn’t offer the greatest pro­tection against it, con­tributing to the severity of the flu season, said Assistant Pro­fessor Biology Silas Johnson.

According to Johnson, most years, the vaccine pro­vides about 40 – 60 percent pro­tection. The CDC per­forms con­stant yearly sur­veil­lance to determine the most common cir­cu­lating influenza strains, then coor­di­nates with the vaccine man­u­fac­turers to match the yearly vaccine to the three or four strains pre­dicted to cir­culate most widely.

The influenza virus is “a moving target,” making it dif­ficult to develop an effective vaccine, Johnson said. Genet­i­cally, one strain of the virus can look very dif­ferent from another, and the virus has a high mutation rate com­pared to other viruses.

“Influenza as a virus is con­stantly evolving,” Johnson said.

Johnson noted that influenza is a res­pi­ratory disease ­— not the “stomach flu” that people often refer to.

Though effec­tiveness varies, Johnson said his rec­om­men­dation “is always to get vac­ci­nated” because the ben­efits for public-health out­weigh the potential down­sides of getting the vaccine.

The most common side effects of the vaccine — including redness and soreness at the injection site, and some­times fever or lethargy — are short-term and localized, Johnson said. The ben­efits, mean­while, include a reduced risk of catching the flu and a shorter duration of the virus for those who do catch it. Those who get the vaccine are also less likely to pass the virus to someone else.

Holland said he has not seen a reduction in flu cases in the area since the hos­pital has begun pro­viding more free flu vac­cines. But he said he thinks more people are reporting their cases than before.

The vaccine reduces severity and risk to others of catching the virus, Holland said, but he noted that san­itary mea­sures can be just as effective.

“Wash your hands a lot and don’t touch your face,” Holland said. 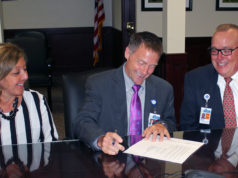 Hillsdale Hospital publishes prices to comply with Department of Health