Autumn, so new only a few weeks ago, is slipping quickly away. What stu­dents might not notice, however, is the fading of the flowers around campus, covered in a last attempt to pre­serve them a few more weeks from the greedy reaches of the frost.

For Angie Girdham, the campus hor­ti­cul­tur­alist, the end of the botanical year is fast approaching. December marks the beginning of her prepa­ra­tions for a new year. Girdham is busy year-round, planting flowers, planning beds, watering, weeding, and pruning from January to December. She works in the green­house and does voca­tional teaching and plant research.

“I’m in there working all winter with the flowers that you see now,” she said. “I try to do a dif­ferent color scheme every year.”

Her job is complex. She per­sonally designs every flower bed on campus, con­sid­ering things such as pests, soil quality, and amount of sun­light. This requires her to grow 5,000 plants every year by hand in the green­house at Hayden Park. That rep­re­sents 150 dif­ferent species.

Girdham said her pre­vious work has pre­pared her well.

“I really think this job has been a beau­tiful com­bi­nation of all my past work,” she said.

She grew up near Hillsdale, although never had any con­nection with the college prior to working here. Her local high school had an excellent voca­tional program in hor­ti­culture, and Girdham quickly got involved and enjoyed it. She studied hor­ti­culture in college, and went on to make it her career.

Pre­vious hor­ti­culture jobs include working in a green­house in Litch­field, voca­tional teaching, and plant research.

“We would get all of the new vari­eties that the seed com­panies or the veg­e­tative pro­ducers were looking at releasing to the public,” she said. “We would take notes on bloom quality, what tem­per­a­tures it sur­vived at, how many weeks it took us to finish, and give that back to the main companies.”

Fourteen years ago, Girdham took her job at Hillsdale College. She is glad she was able to find a job close to home.

“Typ­i­cally for a very good hor­ti­culture job you need to go to Florida or Cal­i­fornia, so I feel very blessed that I was able to get in here,” she said.

Girdham con­tinues to take on new chal­lenges. Recently, she began a plant therapy program at the college.

The plant therapy program meets monthly. Each activity is meant to help stu­dents destress and engage in a mean­ingful and pur­poseful activity that will leave them with some­thing tan­gible. Last month, stu­dents planted a sym­bolic herb garden, while an upcoming session on Oct. 25 will feature arrange­ments of cut flowers.

She also recently received training in arbori­culture, the care of trees. She will now be better able to conduct tree risk and hazard assess­ments, so she can identify when limbs or whole trees need to be removed.

Girdham is in charge of all the tree-planting on campus. This year, she said, she has worked with planting trees on central campus as well as in an area near Gal­loway that was dis­turbed by con­struction. She keeps careful track of when each tree was planted, as well as if there is a story behind the tree, as many trees are planted in memory of donors or former students.

A hobby of hers has been to find out the history of some of the older trees on campus. Among the oldest trees on campus are an oak near Howard, and the sycamore by the old snack bar.

She has researched articles that ref­erence tree plantings to find out the ages of many of the trees around campus, and has talked with the college his­torian as well. Unfor­tu­nately, it is hard to find much infor­mation. This has inspired Girdham to be metic­ulous in her own record keeping.

For­tu­nately, Girdham doesn’t have to work alone. A team of four stu­dents join her, putting in a col­lective 24 hours each week. Many of those stu­dents work with Girdham all four years, and in exchange, she will often provide free flowers for their weddings.

Among those stu­dents is junior Arena Lewis.

“It’s so fun,” she said, speaking of working with Girdham. “It’s like an older sister and a mom all in one.”

“She’s not afraid to let us try things and set us off on our own,” Lewis said. “She just trusts us.”

While many stu­dents might not notice the flowers around campus, the work is important, Lewis said.

“We always say, ‘People don’t notice the things we do to make the campus pretty, but they would notice if we stopped doing it.’”

That’s not a problem, though, Lewis said.

“I kind of like that it’s an unno­ticed job,” she said. “You just do it for your own joy.”

Another of Girdham’s student helpers is junior Adrianne Fogg, who said she enjoys working with Girdham.

“She’s such a patient, under­standing person,” Fogg said. “Her passion is to do hor­ti­culture therapy, and she wants to reach people through plants. She just has such a caring heart for the plants and the people together, it’s just a really beau­tiful thing.” 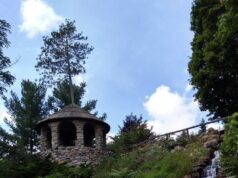 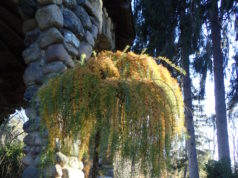