Hillsdale College’s Daniel M. Fisk Museum of Natural History in Stro­sacker Science Center has added hun­dreds of spec­imens col­lected this summer by Pro­fessor of Biology and curator of the museum Anthony Swinehart. The spec­imens will enhance the public dis­plays as well as aid in research and classroom teaching.

In order to acquire these spec­imens, Swinehart set out on a summer-long excursion, spanning nine states and eight geo­logical time periods within the Mesozoic and Pale­ozoic eras. He covered much of the Southeast and several states in the Southwest, but he also explored the Upper Peninsula and ended in Hillsdale County. Some expe­di­tions he went on alone, but for some, junior Spencer Bohlinger joined him.

The Mesozoic era includes three periods — the Tri­assic, Jurassic, and Cre­ta­ceous. According to Bohlinger, most of the dinosaurs people are familiar come from the latter two periods.

“The Tri­assic period is a really inter­esting time in earth’s history though, because it’s when dinosaurs started to evolve, and there’s only a few places in the world you can go to see them,” Bohlinger said. “We now, from this trip, have some of the largest col­lec­tions of some types of Tri­assic fossils.”

Due to limited display space, only a small per­centage of these spec­imens will be placed on public display. The remainder will be stored out of sight in the museum to be used for research and teaching. He said many of the spec­imens may not be par­tic­u­larly aes­thetic or notable for dis­plays to the general public, but they may be very valuable for research and teaching pur­poses.

“Some of them are more crowd-pleasing than others,” Swinehart said. “Some spec­imens are very important to science but aren’t very inter­esting to the average visitor.”

He explained that the vis­i­bility of a fossil, which makes it eye-catching to spec­tators, and its rarity, which makes it rel­evant, are two big factors in deter­mining what goes on public display in the Fisk Museum.

Swinehart said the museum was lacking in fossils from certain geo­logical time periods. When he came to Hillsdale in 1998, there was no museum. Now, 20 years later, it is one of the only small schools in the nation with two mostly com­plete dinosaur skeletons. Swinehart said the Fisk is dif­ferent than many museums because it is in the process of being rebuilt after being lost from the campus for more than half a century. It is still building up some of the common pieces that other college museums already have.

Addi­tionally, one of Swinehart’s former stu­dents, Randall Rush ’17, owns a New Mexico ranch on top of Tri­assic rock, which is often inac­ces­sible.

After finding a large deposit of rel­a­tively rare Tri­assic mollusk fossils in New Mexico, there is a good pos­si­bility that the mol­lusks may yield new species to science, according to Swinehart.

“This par­ticular assem­blage of fossils is notable, and I will soon be pub­lishing it in a sci­en­tific journal,” Swinehart said, in an email.

After taking Swinehart’s classes, Rush became very inter­ested in pale­on­tology and is cur­rently vol­un­teering and doing research in the field. Vis­iting the ranch was the original target trip for Swinehart, but he decided it would be sen­sible to do research on cities along the drive.

“I worked with Dr. Swinehart on a couple of fossil hunting expe­di­tions in past summers — South and North Dakota and ones in Nebraska,” Rush said. “We had been dis­cussing this one for a while.”

Another notable find that Swinehart said will be fea­tured in the Fisk is Sil­urian algae from the Upper Peninsula of Michigan, which is not only rare and dif­ficult to spot but also has the intrigue of locality. What makes this fossil so special, he said, is that unless they get buried in low oxygen con­di­tions, they don’t typ­i­cally fos­silize.

Part of the reason for the emphasis on fossils in these new addi­tions is Swinehart’s per­sonal interest in fossils and his goal to develop research oppor­tu­nities in pale­on­tology for stu­dents.

“I gen­erally have some groups that I focus on with an eye for student thesis research,” Swinehart said. “The goal is to do some of our research without having to leave the museum.”

Bohlinger said one way the museum is incor­po­rated into the classroom is for studying pur­poses. For example, he said stu­dents in Swinehart’s His­torical Geology class are respon­sible for knowing the names of dif­ferent museum spec­imens.

Before fossils go out on display, the fossils must be pre­pared, which, for some of them, involves getting cut out of the rock. From there, they’re given catalog numbers and placed in pack­aging with the appro­priate infor­mation written on it. All of that is then put into a database that makes it easy to find where and when the fossil was found and what the fossil is.

“We’re devel­oping one of the finest natural history museums in the state,” Swinehart said.

Bringing stu­dents on summer excur­sions is one way the college is able to improve the museum.

“Given the size of our school, the quality of science program is available almost nowhere else,” Bohlinger said. “Although bigger schools may have the same resources that we do, I wouldn’t have the same rela­tionship with my pro­fessors and have summer oppor­tu­nities like this one.” 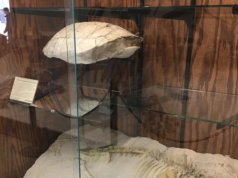 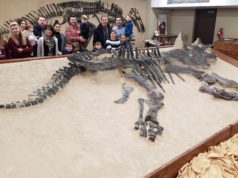 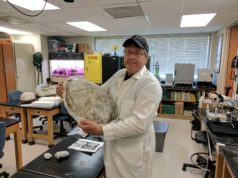 From dig to display: Swinehart, alumnus find fossils for museum