Hillsdale stu­dents reached for the stars as they lis­tened to a panel of faculty discuss the future of space.

The Alexander Society hosted a panel of pro­fessors from various aca­demic depart­ments to discuss the newest mil­itary branch — the Space Force. Pro­fessors speaking were Asso­ciate Pro­fessor of Eco­nomics Charles Steele, Assistant Pro­fessor of Physics Timothy Dolch, and Paul Moreno, pro­fessor of history and dean of the social sci­ences. Each spoke for 10 minutes about their dis­ci­plinary per­spective on the cre­ation of the Space Force, and then the panel answered ques­tions from the audience.

“I never knew what the impli­ca­tions of the Space Force would look like,” freshman Morgan Billingsley said.“I wanted to see what three more learned people had to say.”

Pres­ident Donald Trump pro­posed the estab­lishment of the United States Space Force as the sixth branch of the mil­itary on June 18 of this year. The current plan is to create the pro­posed service by 2020.

Though from dif­ferent dis­ci­plines, the panel agreed that the devel­opment of the Space Force is an appro­priate and fitting decision; however, they expressed dif­ferent reasons for sup­porting their belief.

Steele chose to focus on the potential eco­nomic devel­opment of space and mil­i­ta­rization beyond earth.

“Below earth’s orbit — the space between here and the moon — is mil­itary high ground, and it’s going to be occupied,” Steele said.

He said there is already an economy in space, and if the United States does not advance in space, someone else will.

“Space is already mil­i­ta­rized,” Steele said. “And I think it is inevitable.”

Steele also referred to the Soviet Union and their long-running efforts in space as well as the Russian Space Force. He com­pared the con­quest of space to the European efforts at sea in the 17th century.

Steele said a decen­tralized market approach to space works well if there is a phys­i­cally defined goal such as going to the moon.

“If you’re trying to max­imize con­sumer value, then you need some­thing that is more market based,” Steele said. “That’s the direction we’ve been moving.”

Steele also said in order for devel­opment to happen, the space economy will be based on exclusive property rights.

“The reality is that we will see a trillion dollar space economy,” Steele said.

He focused on the history of space devel­opment and made the claim that the Space Force, as a general concept, is nothing new. He noted how space tech­nology developed after World War II, specif­i­cally with the space race that led to the devel­opment of going to the moon during the Kennedy admin­is­tration.

“There has always been this close rela­tionship between the mil­itary and space explo­ration of various kinds,” Steele said.

Dolch noted that a major moti­vation for the Space Force is to have a space-based tracking and defense system that would defend against the sort of weapons that come out of space to earth. Dolch said the biggest reason for Space Force is to defend satel­lites.

“One of the reasons of now for increasing mil­itary activity in space, is utterly dependent on the GPS system which is a global net­working system,” Dolch said. “If a foreign adversary took out a network of these satel­lites, we would be utterly crippled.”

Moreno said the mil­i­ta­rization of space is inevitable.

“The human record is almost 100 percent certain that there will be mil­i­ta­rization wherever human beings can mil­i­tarize things,” Moreno said.

Sophomore Philip Andrews said he had some important take­aways from the panel.

“I agreed that space will keep expanding, and I think it should keep expanding,” Andrews said. He  added that he is curious to see how recruitment will work for the Space Force and who will join.

Moreno said the history of humanity has led to the mil­i­ta­rization of space.

“Some­thing in human nature guides us to space,” Moreno said. “Human soci­eties will stop at nothing when they think their sur­vival is at stake.” 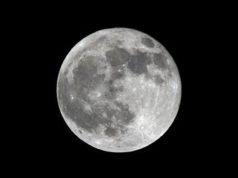 The High Frontier is open: The next space race has begun