After Ranessa Cooper, former asso­ciate pro­fessor of biology, left Hillsdale to become the Department Chair of Bio­logical Sci­ences at Western Illinois Uni­versity, Van Zant approached the college and offered to step up as the new director of the Arboretum.

“It requires a lot of main­te­nance to maintain the Arboretum. You’re jug­gling any number of balls. There are a lot of spokes going out from the Arb director,” Van Zant said. “But I have loved the Arb since I’ve been here. I take my kids there a lot, and I was just looking to do a little bit more.”

Van Zant will manage every­thing from the Arboretum grounds to its accounts to its hor­ti­cul­turist.

“Van Zant has always been a sup­porter of the Arb,” Laurie Rosenberg, Arboretum Program Coor­di­nator, said.

Rosenberg added that Van Zant brings his kids along to almost every Arb event, and it has become a running joke.

“Whenever we take pic­tures of any events in the Arb, it’s always fea­turing his kids. They have always been the unof­ficial face of the arboretum,” she said.

Cooper served as the Slate Arboretum Director for 16 years, and and in that time, one of her major accom­plish­ments was to restore the waterfall.

“Her big legacy was the waterfall. That was a huge project,” Rosenberg said. “It had fallen into a lot of dis­repair before Cooper came, so it was a big push to regen­erate and restore the waterfall.”

Van Zant inherited a five-year plan for the Arboretum’s devel­opment from Cooper, which calls for the restoration of the Arboretum’s his­torical witch hazel, mag­nolia, and lilac col­lec­tions, for which the Arboretum was once famous.

“I am pleased that Jeff has taken over as Director of Slayton Arboretum,” Cooper said in an email. “He will work well with the Arb staff to promote the mission put forth by [the original Arboretum director] Bertram Barber.”

While Van Zant has yet to plan any major projects, he is con­sid­ering expanding the Christmas light show from the Children’s Garden to parts of the regular Arboretum.

“I like Christmas lights, and I think the more, the merrier,” Van Zant said. “The waterfall is lit at night, but I think you could light things in the ponds there, in the stone house, and things like that.”

Stu­dents who vol­un­teered in the Arboretum said expanding the light show might require more workers to pull it off.

“It would take a long time. It already takes us most of November to put the lights up. But if we could get enough people to do it, I’m sure it would look cool,” senior Abraham Pater­noster said. “It would just be a question of man­power.”

The Arboretum’s stone cottage might also receive a facelift. After a pipe burst during the summer, the college made ren­o­va­tions to the cottage, and Van Zant is con­sid­ering using the oppor­tunity to polish the cottage’s appearance.

“This would be a good chance to replace the windows and the tile, but do we have the money to do that?” Van Zant said. “We’d like it to look nice in there, so can we get some new fur­niture and make it [look] like a botany lab in the days when it was first built.”

Van Zant is also con­sid­ering opening the green­house in the Dow Science building as a study area. He plans to monitor the green­house con­di­tions this winter to see whether adding tables and chairs would be prac­tical.

“Very few people go into the green­house, and I’d like to open it up more and make it more of a usable space. If you keep the envi­ronment where it is warm enough and not too humid, I think we can attract stu­dents in there,” Van Zant said. “It’d be a nice place during the winter — nice and green.”

Junior Eleni Besto­larides said that the arb is in good hands.

“I’ve known him since I was a freshman. It’s been really cool getting to know someone who is like a pro­fessor, dad figure,” Besto­larides said. “I’m opti­mistic. I think the Arb under him will con­tinue to grow and change.” 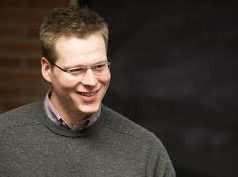