To the women of Kappa Kappa Gamma, their cook and new house director, Jen­nifer Steele, is mom.

Com­monly called “Jen,” Steele has served as the cook for KKG for almost four years, and has accepted the position as the sorority’s house director this semester, since former House Director Debra Reister retired last spring.

“When we found out Jen was going to be our house mom we were all very excited, because she always makes us feel so welcome in the house,” senior and House Chair Laurel Armes said.

A former KKG house director rec­om­mended Steele for the open position as the sorority’s cook, and she has held the position ever since. After three-and-a-half years, the house director position opened up, and, although the house adver­tised it pub­licly, many members of KKG wished for Steele to accept the position. Although still adjusting, Steele said she feels pos­itive about her new position.

“I feel that the tran­sition is pretty natural. I like both parts of the jobs, but I have only been doing one of them for a few weeks,” Steele said.

Bal­ancing her jobs as a cook, house mom, and an actual mother to a high school sophomore and a college sophomore, Steele attributes her ability to connect with the women of KKG to her under­standing of her own children.

Senior and pres­ident of KKG Andie Chandler said she rec­og­nizes Steele’s loyalty to her family as a special aspect of how she loves the women of the sorority.

“Jen makes Kappa feel like a home in so many dif­ferent ways,” Chandler said. “As a mother to a daughter of her own, she has been well-equipped to handle the task of caring, com­forting, and cooking for a house of women.”

Steele said that throughout her years as the cook, she has seen the com­munity in Kappa evolve.

“The girls are always friendly and uplifting,” Steele said. “But now, it almost feels closer in the house. It’s a bit quieter, but dif­ferent groups work dif­fer­ently, espe­cially when you have 30 per­son­al­ities living together.”

Chandler rec­og­nizes the special place that Steele holds within the house, as well as how important Steele’s new role as house director serves in the comfort of the members’ expe­rience in the sorority.

“When she was a cook, she would only come for meal times, but now that she’s the house director, she’s around all the time and eats with us during meals,” Chandler said. “She has been so under­standing and makes sure every girl feels at ease within our house. That is such an important part.”

For Steele, with the duties of house director and cook, com­mu­ni­cation is key to coor­di­nating the chapter’s meals and events, espe­cially those requiring food. Members of the exec­utive board of the sorority, such as Chandler and Armes, remain the most con­nected with Steele for their position’s duties.

“It’s super important for us to maintain con­stant com­mu­ni­cation, espe­cially when we’re doing events inside the house,” Chandler said. “It actually cuts out another person in ways, because if we’re asking for certain food for an event, then not only is she able to get the food we need, but she knows about the event that we’ll be having.”

Although Chandler’s role may be more focused on the chapter’s events as a whole, Armes’ position as house chair focuses on the liv­ability and in-house expe­rience of its members, which ties closely to Steele’s job description.

“I have weekly meetings with Jen, or whenever I see her we go over any­thing going on in the house: meal planning, any problems girls are having with fix­tures in the house, etc.,” Armes said. “We do just talk about our lives too, though.”

Armes says that Steele is involved in the Hillsdale com­munity, espe­cially since she has lived in Hillsdale all of her life, and very much a “family person,” as she often tells stories about her children.

“I love talking with her about her daughter, Maggie, who helped organize the Kappa kitchen over the summer, and her son Seth, who is at college in the UP and just joined ROTC, I believe,” Armes said. “You can just tell she loves her family and is very inten­tional about being there for Maggie’s events, even though she stays at Kappa most nights.”

Alongside talking about how her classes are going and her family, Armes comes together with Steele to plan weekly meals for the 40 women on KKG’s meal plan.

Some of the meal planning for KKG includes trademark dishes from Steele or meals sug­gested by its members. Favorite dishes of the chapter’s members include Steele’s Greek salad, pesto chicken, paninis, and “puppy chow.”

“My favorite part of the job is the kitchen, because I love to bake and cook,” Steele said. “My favorite thing to make is any­thing chocolate. With 40 girls, chocolate is always a hit!”

According to KKG members, Steele not only takes on the roles but lives out the true essence of her title “house mother,” by pro­viding them with both home cooking and comfort foods, as well as motherly support and involvement.

“Jen is always so at ease and is willing to do the little things, whether it be asking us about our day, making our favorite muffins on Fridays, or running throughout the house to open all the windows during a storm to help with the lack of air-con­di­tioning,” Chandler said. “Jen helps us live gra­ciously and live well, and for that we are very thankful!” 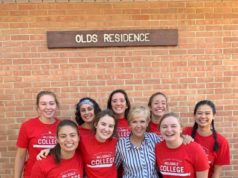 Olds House Director to leave at end of the month 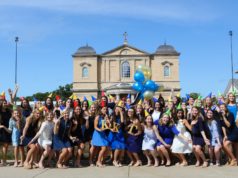