Two thousand miles into their nearly 6,000-mile prayer walk across America, Lyn and Darrol Hanush took a slight detour up Baw Beese trail on Tuesday, snapping a selfie in front of the eagle statue at the Hillsdale College campus entrance and adding an entry to their daily blog.

“I get Imprimis and read it and love it,” Lyn Hanush, 76, said. “I love what college stands for, I love that they’re teaching about America and the Con­sti­tution and what really is America. When I realized my route was kind of close to Hillsdale, I said, ‘That’s where Hillsdale College is, I bet,’ and I knew I had to come to Hillsdale College.”

The Hanushes began their “GPS walk” on July 4, 2017, starting in Maine, and working their way toward southern Cal­i­fornia, after which they’ll cross back east and end in Mis­sis­sippi. After trekking northwest through Ohio for several days, they crossed into Michigan and will have their motor home parked at Gateway Park Camp­ground until Thursday.

This is Lyn’s fifth and final cross-country journey, in which she’s attempting to hit all the remaining states that she hadn’t reached during the other four trips. Lyn and her son Darrol walk about 4 hours a day, 5 days a week, aver­aging about 10 miles each day. Lyn’s husband, Dave Hanush, drives them back at the end of each day to their motor home, which they move peri­od­i­cally from camp­ground to camp­ground, and then  drives them back in the morning to where they left off the pre­vious day. They estimate the trip will take them a total of six years and cost an excess of $94,000.

Exec­utive Assistant to the Director of Parent Rela­tions Cheryl Clawson said she ran into Lyn in Moss Hall when the Hanush family visited the campus Tuesday.

“I met her in the hallway at Moss Hall looking like she was lost,” she said. “I asked if I could help her and she said she was walking across America and praying for our country.  She wanted to let an admin­is­trator know. I struck up a con­ver­sation with her, and later she came by my office to give me a book she had written, and I met her husband and son. Before they left, I asked if I could pray with them about their mission, which we did.”

Clawson said running into Lyn and her son was a “won­derful chance expe­rience,” as she is cur­rently caring for a foster child.

“It was prov­i­dential, I’d say. Her son was adopted and was per­sonally encour­aging to me as we talked about my foster grand­daughter and our hopes for adoption into our family,” she said.

“Hillsdale College has gotten a lot of prayer because I really love this college so much,” Lyn said.

Lyn says the journey started as a “pipe dream” since she was 11 years old of cycling across the United States. After her mother had a stroke, she started taking long walks, pushing her mother in a wheel­chair. One summer she decided to walk all the way up the state of Cal­i­fornia.

“I realized this is some­thing I can do, and I love it,” she said.

After her first two cross-country walks, focused on raising money for various causes, she was already preparing for a third walk when Sep­tember 11, 2001 came.

“When that hap­pened [Dave] and I looked at each other and we instantly realized it would have to be a walk of prayer for our nation,” she said. “And every walk since then has been walk for the nation.”

In 2008, an election year, Lyn did an East Coast walk during which she prayed for the election.

“I make it a point not to put out there who I’m for. I try keep it non­po­litical when I’m walking and when I’m meeting people. But I’m praying so that people will pray and make wise choices.”

One of the high­lights of the trip so far came in January, when the Hanushes paid a visit to Willie’s Duck Diner in West Monroe, Louisiana, owned by “Duck Dynasty” star Willie Robertson. Although they didn’t get to meet the Robertsons, the Hanushes said they saw the family on Sunday when they visited White’s church. The real climax of the visit, though, was when Darrol was able to reconnect with a few of his birth rel­a­tives, whom he hadn’t seen in 15 years. He had no contact infor­mation, but he remem­bered his two aunts worked at the Walmart in the area, so he asked the super­visor about them.

“I told her they’re from Wins­borough, Louisiana. She says ‘Really? My dad is from Wins­borough.’ She says ‘Just a second.’ She gets on the phone… so within 45 minutes, I was reunited with them. And then I got to see the rest of them the next day.”

Lyn reviews scripture verses she has mem­o­rized while she walks and has chosen a new verse to focus on every year since 1988. This year’s is Isaiah 41: “I am the Lord your God. Do not fear; I will help you.”

This is Darrol’s first trip, and he says he never would have done this before, but has seen God develop his spir­itual gifts.

“I’m a very out­going person, but to go up and ask people ‘Can I pray for you?’- I never used to do that. I think if all of us were more like that we would make more of a dif­ference.”

During Lyn’s other trips, Dave, a retired cer­tified public accountant, would visit her peri­od­i­cally. He expe­ri­enced a stroke shortly before this trip and is unable to walk the long dis­tances, but this time he decided to come along as the group’s driver.

“Everybody’s retirement dream is to travel,” he said.

Many people have stopped along the road to talk to the Hanushes. Some ask if they need direc­tions, another passed them in the rain and threw ponchos out the window while returning in the other direction. Lyn said one group of TV jour­nalists slammed on the brakes after passing them on the road and asked for an interview.

The Hanushes always offer to pray for stopping passersby, and occa­sionally someone will even join the Hanushes for part of their journey. Lyn said Jamestown, New York was one of her favorite stops along this route, where they met a couple who took them out to lunch.

“He came the next day and walked with us so he could know what it was really like and know how to pray. That was just really special that he would do that.” 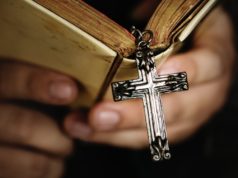 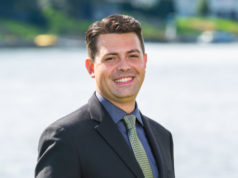 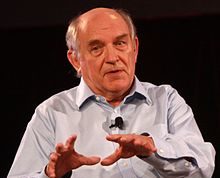