If you’re going through Hell, Michigan, keep going. That’s exactly what the members of Hillsdale’s Outdoor Adventure Club did this past weekend.

In its first event of the year, Hillsdale College Outdoor Adven­tures Club orga­nized a group of stu­dents to race in the 10th annual Run Wood­stock Trail Runs. Senior Emma McCormick, the club pres­ident, ran the 50 mile race and placed second in her age group. Asso­ciate Pro­fessor of Eco­nomics Charles Steele, the club’s advisor, ran the 50K (31 miles) and placed second in his age group. Junior Karissa McCarthy and seniors Josh Bailey and Lauren Schlientz par­tic­i­pated in the marathon and placed first, second, and second in their age groups, respec­tively. Senior R.J. Norton par­tic­i­pated in the half marathon and placed first in her age group.

This weekend’s excursion was McCormick’s second time at the Run Wood­stock Trail Runs and her second time running 50 miles at once. While she did not run com­pet­i­tively in high school or college, McCormick said she has always made running a part of her life.

She added that running clears her mind, and without that time to sort through her thoughts, it can take longer to fall asleep.

Fin­ishing a 50 mile run in 10 hours was not easy, and McCormick said it was a feat she never envi­sioned accom­plishing.

“If you had told me a year ago I would be running 50 miles I would have laughed at you,” she said.

But she said the pain and hard work were well worth the reward.

“After running 50 miles you kind of feel like any­thing is pos­sible,” McCormick said.

Schlientz, a lifelong soccer devotee and par­tic­ipant in last weekend’s marathon, was not always drawn to the sport, and it took her father’s per­sis­tence to con­vince her to give it a try.

“I didn’t see the purpose in running,” Schlientz said.

She said her father used to go on evening runs and always encouraged her to come with him. She ini­tially refused but com­pro­mised by agreeing to accompany him on his runs while riding alongside him on her bike.

Schlientz’s father even­tually con­vinced her to run as a way to stay in shape during the off season for soccer, and she quickly fell in love with the sport. She now incor­po­rates running in her life on a daily basis and looks forward to her morning runs with great antic­i­pation.

“I just fell in love with it,” Schlientz said. “It’s amazing. You start off your day accom­plishing some­thing.”

She said that while she may not have been the most phys­i­cally pre­pared for her race, she was thor­oughly pre­pared men­tally.

“It’s 70 percent mental — you just have to stay pos­itive. You have to tell yourself, ‘I know I can do this,’” Schlientz said, adding that running has helped to strengthen her resolve and sharpen her deter­mi­nation, ulti­mately improving her char­acter as a whole. 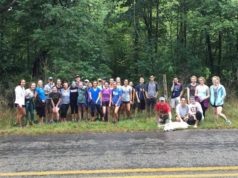