Tune into Radio Free Hillsdale on a Wednesday and you might hear some serious shenanigans. The voices of sophomore Isabella Redjai and junior Kiara Freeman bring “quirky news, wild inter­views and unso­licited opinions” to the WRFH air­waves.

Redjai and Freeman’s podcast, “Miss Informed”, has been running since Fall 2017. Redjai replaced Meghan Cain ‘18 as one of the show’s two hosts this fall.

Cain came up with the idea for “Miss Informed” her junior year. Cain desired to combine her interest in media and radio with enter­tainment to create content that was dif­ferent than the serious, political vibe of the other radio shows already on air at 101.7.  Her first show, however, never really got off the ground.

“I let it sit in my ‘To-Be-Done and To-Be-Edited’ pile- it didn’t feel right to do it alone,” Cain said.

That summer, however, she couldn’t shake the idea of starting an enter­tainment radio show at Hillsdale, and the next fall, she decided to try again. After getting Freeman on board to co-host the show, the two pitched the idea to Scot Bertram, general manager of WRFH.

“I liked it. If you know Mehgan, she has a very out­going, bubbly per­son­ality, so she could carry some­thing like that,” Bertram said.

From there, the show took off.  Cain and Freeman added then-junior Jordyn Pair to the team as the pro­ducer, and the team aired an entire season of “Miss Informed”.  The show’s most popular episode to date has reached 231 hits on Sound­Cloud. The show was so suc­cessful in its first season that WRFH brought it back for a second season. When Cain grad­uated, the show needed a new host, and after her success and natural fit on the show, Redjai was then asked by Freeman and Pair if she wanted to be a per­manent part of the team for the next year.

“I actually filled in for Mehgan on one episode last semester,” said Redjai. “I wanted to be a part of the radio station, and I love Jordyn and Kiara, so I was like, ‘Yes! Of course.  Of course I will’.”

Recording can be a bit hectic. Some­times, things don’t always go as planned.  During one show, while playing a game called “Guess the Food,” their lack of prepa­ration forced them to think on their feet.

“We had to run to saga [the dining hall] in the middle of the show to get the food and then run back to the radio station,” said Freeman.

With a new team and growing success, the “Miss Informed” crew is now looking for new ways to promote the show and branch out in the field of media. They plan to add a video segment in addition to the radio show, and want to publish a new video each month. The first video, an interview prank of the freshmen on campus, reached 1,800 views on YouTube within the first week of its being pub­lished.

With a brand new crew and plenty of new ideas, “Miss Informed” looks to give its audience a fan­tastic second season, bringing, as the hosts them­selves say,

“The quirkiest news, the wildest inter­views, and our unso­licited opinions on things on which we are… mis­in­formed.” 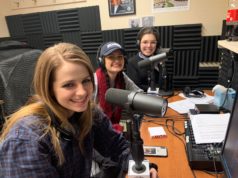