The son of a pro­fes­sional singer in New York City, Chris Matsos spent his childhood attending Broadway plays with his father and per­fecting his imper­son­ations of cel­e­brated actor Gary Oldman. Occa­sionally, young Matsos would take the stage himself in his mother’s productions.

Today, Matsos, newly-hired pro­fessor of the Hillsdale College department of theatre and dance, is starting his first semester here on campus alongside his wife Tory, lec­turer in theatre and dance. He will be teaching Under­standing Theatre, Theatre History II, and Acting I.

His talents are not limited to the classroom, however. After studying theatre and religion at The College of Wooster in Ohio, he earned his Master of Fine Arts in acting at the Uni­versity of Florida.

He then worked pro­fes­sionally for a few years, acting, directing, and play­writing. He has worked at the Woolly Mammoth Theatre Company, The British Shake­speare Company, and Sight and Sound Theatre, where he met Tory, a 2002 Hillsdale graduate. Addi­tionally, Matsos worked as an extra on the set of “Batman Begins,”  wit­nessing Christian Bale’s final jump from the top of a building at the end of the movie.

One of Matsos’ most recent roles was “Black ’Stache” in Farmers Alley Theatre’s pro­duction of “Peter and the Star­catcher.” Over the course of the play, his char­acter loses his hand and becomes the infamous Captain Hook from the beloved children’s story.

One of the audience members at the pro­duction was none other than James Brandon, chair of the department of theatre and dance at Hillsdale, who said that Matsos’ per­for­mance was a “scene stealer.”

“He is a very genuine person, and very open, and you feel like you know him right away, and then to see him play Captain Hook on the stage,” Brandon said. “He’s unrec­og­nizable, and that, of course, is what good acting is sup­posed to be.”

When he wit­nessed Matsos’ per­for­mance, Brandon said, “It cemented every­thing in terms of his talents.”

Even while he enjoyed success as an actor, Matsos said he missed teaching.

“I realized one day that I had every­thing that a pro­fes­sional working actor needs or wants, which is a steady income and friends and a rewarding expe­rience with the audience, but I des­per­ately missed teaching,” Matsos said. “And I realized it was the engagement with stu­dents that was my source of energy and helps me to define my work as a theatre person.”

He taught at a variety of insti­tu­tions until the fall of 2016, when Hillsdale was looking for someone to fill in for George Angell, now-retired lec­turer in theatre and dance, while he was on sab­batical. Brandon said he imme­di­ately thought of Matsos.

“I was thinking, ‘Man! It would be great to have him at Hillsdale,’ but at that time there wasn’t a job,” he said.

With Angell on sab­batical, Matsos was hired. Within a short time, he made quite an impression.

Junior Michelle Reid took his class in 2016 and said Matsos may have been the “most won­derful” pro­fessor she has ever had.

“I think it’s dif­ficult to truly receive much from art in an envi­ronment that is too demanding, par­tic­u­larly if it’s not your primary passion,” she said. “Matsos gave us stu­dents enough freedom coupled with enough structure to truly appre­ciate theatre.”

The admi­ration was mutual. Matsos also expressed a love for the com­munity here at Hillsdale.

“I have never taught any­where like it,” he said.

Before coming to Hillsdale, Matsos said he was “losing faith” in higher edu­cation, but the love of learning so apparent at Hillsdale rekindled his hope.

When it became apparent that Angell was about to retire after serving the Hillsdale student body for more than 30 years, Matsos was the obvious candidate.

“It was just a matter of hoping no one would snatch him up before we had a chance to interview him,” Brandon said. “We were very blessed and very lucky.”

Matsos’ triple talent in acting, directing, and teaching theatre history was, according to Brandon, “a very rare com­bi­nation,” fitting the theatre department’s needs.

“The best classes are classes where you feel there is a spirit of inquiry with the pro­fessor. He is learning along with you. He knows the stuff already, but it feels like you all are going on a journey together,” Brandon said. “It just really feels like you’re part of some­thing. It is easy to get moti­vated to come to class for some­thing like that. You’re part of a discussion.”

“His classes def­i­nitely had more dis­cussion than lecture, but he always pro­vided a pow­erful per­spective as a result of his extensive per­sonal involvement in the theatre industry,” Reid said.

Matsos said he hopes stu­dents have a sense of the pro­found ways in which live theatre has shaped Western culture.

“You cannot under­stand the history of Western culture without knowing how dra­matic lit­er­ature and per­for­mance has impacted it,” he said.

At a prac­tical level, Matsos, who con­tinues to act pro­fes­sionally, plans on using his pro­fes­sional con­nec­tions to assist stu­dents in finding jobs in the per­forming arts. He said he antic­i­pates having col­leagues teach work­shops in the future.

His direc­torial debut on campus will be this November in the heart­warming play “Harvey.”

From a young child prac­ticing his imper­son­ations of Gary Oldman to an accom­plished pro­fessor and actor, Chris Matsos’ love of the per­forming arts has been a driving force in his life.

“Acting is not putting on artifice to become some­thing you’re not,” Matsos said. “It’s about taking away the masks that we already wear in our daily lives and finding the vul­nerable heart of who we are as indi­viduals. That is some­thing I try to instill in my students.” 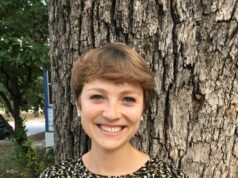 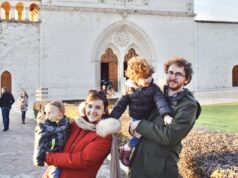 Making history, one Italian class at a time 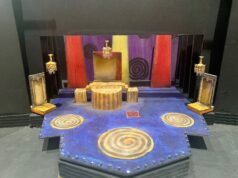