At 37 percent, this year’s enrollment rate is the lowest it has ever been, down from 41 percent last year and con­tinuing a 4‑year downward trend. The school’s Admis­sions Office usually aims for a class size ranging from 350 to 380 stu­dents, and this year it enrolled 357 stu­dents, down from 391 last year.

“We’re getting really good — and I think we’ve always been good — on the yield side,” Senior Director of Admis­sions Zach Miller ’11 said, referring to the admis­sions department’s ability to recruit appli­cants. “And the fact that Hillsdale is becoming a little more popular as an insti­tution across the country — that helps us get the stu­dents we’re looking for.”

Miller said this year’s male-to-female ratio is unusual, espe­cially given the national trends. According to the National Center for Edu­cation Sta­tistics, females were expected to make up the majority of the nation’s college and uni­versity stu­dents in fall 2018, with 11.2 million total female enrollees and 8.7 million male enrollees.

“Usually the classes are larger for women, and that’s gen­erally the way it’s been at Hillsdale the past couple years,” Miller said. “That’s not some­thing we aim to do. It’s the way the appli­ca­tions kind of fleshed out at the end of the day.”

All the data is only pre­lim­inary and will not be offi­cially con­firmed until mid-Sep­tember, but according to Miller, the pre­lim­inary data tends to be “on target” with the official records.

Addi­tionally, the college drew only 25 percent of its stu­dents from Michigan, the smallest per­centage in the college’s records to date. Records from the past seven years show the per­centage of Michigan stu­dents in the low 30s.

Miller attributed the declining per­centage of Michigan-native stu­dents to Hillsdale’s growing national rep­u­tation and to the fact that this is the second year the admis­sions department has had four regional admis­sions coun­selors who reside in their respective areas of recruitment: one in Cal­i­fornia, one in Texas, and two in Wash­ington, D.C.

Freshman Jaime Boerema said having an admis­sions coun­selor was helpful during her tran­sition to Hillsdale.

“I knew I wanted to be here, but cer­tainly having support in admis­sions and having contact with people at the college makes me feel like I’m having an easier tran­sition,” Boerema said. “I think having a good rapport with your admis­sions coun­selor is def­i­nitely an important part of going to the school you want to go to.”

Boerema is from Michigan and was put on the admis­sions waitlist after applying to Hillsdale.

“I know it was really hard to get in this past year, and I feel really blessed to have made it off the waitlist,” Boerema said. “I think that is encour­agement and incentive for me to work that much harder.”

The class of 2022 also had a slightly lower average on the ACT, scoring 30.16 out of 36, down from 30.26 in 2017. But the freshman class did average slightly higher on high school GPAs with a 3.89 average, up from last year’s 3.87. Miller said the scores speak for a “very strong” aca­demic class and that it is the goal of admis­sions to bring in the “best stu­dents in the country.”

“It’s an honor really to know I came out of that pool,” freshman Jack Coker said, “which is good because I only applied to Hillsdale and didn’t apply any­where else. I put all the eggs in one basket.”

Miller added that the admis­sions department is excited about this year’s freshman class because bringing the stu­dents to campus is the result of over a year of hard work.

“Ori­en­tation Sunday is always like our Christmas,” he said, “because we get to welcome these kids that we’ve talked to and worked with, and we get to see their excitement of starting their journey at Hillsdale.” 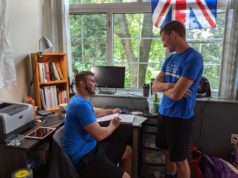 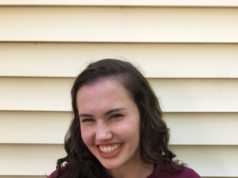 What I wish I knew as a freshman