On the patio of the New Dorm last week, the inter­varsity of inter­na­tional stu­dents gathered around a hearty bonfire, roasting s’mores and chatting about their week.

“I met amazing people and got to talk about Colombia, my college expe­rience and even played some Colombian music,” Juan Vargas Her­nandez, a second-semester sophomore and transfer student from Colombia, said. “After that, a friend and I decided to have a His­panic night, which we are working on.”

Former Kenyan student Monicah Wanjiru ‘18 started the min­istry group in 2015 after meeting an inter­na­tional student who felt very alone and wanted to leave Hillsdale — a place where it seemed that no one under­stood her and that was more reli­gious than she was used to.

“It was the most reli­gious envi­ronment she’d been in,” Wanjiru said, “and the most lonely she’d ever felt…I thought, for the first person to welcome her to America to be a Christian and to love on her, that for a non-Christian opens so many doors.”

The inter­varsity is growing more popular and well-known as sopho­mores Sofia Krusmark and Emille Martelli strive to foster global rela­tion­ships on campus and explore new events for campus this year.

“I want to be able to cater events to their interest,” Krusmark said. “I want all of them to feel com­fortable. I want them to come because they want to hang out with each other and be part of a com­munity that wel­comes them and accepts them.”

Inter­varsity staffer Griffith Brown ’17 said the group part­nered with Coun­tryside Bible Church and pre­sented the stu­dents with care packages filled with the basics — towels, blankets, toi­letries, and contact infor­mation. They are hoping to schedule more events like the bonfire as well as give them options for Thanks­giving, fall, and Christmas breaks.

“On the radar right now are fall break and Thanks­giving break, which can be tough for inter­na­tional stu­dents because they don’t have any­where to go,” Brown said. “So we’re coor­di­nating with some local churches and with Coun­tryside to get them a place to be.”

Although the inter­varsity cul­ti­vates a Christian outlook and mission, Martelli said the primary focus is devel­oping authentic friendships.

“The goal is for the inter­na­tional stu­dents to connect with each other and to connect with Chris­tians on campus,” Martelli said. “This min­istry is focused on wel­coming the inter­na­tionals, helping them inte­grate into campus culture, and…more specif­i­cally, we want our min­istry to be very rela­tionally focused…and we want it to be a place where they can explore their beliefs.”

Krusmark agreed, saying that though they want to connect the stu­dents with Chris­tians on campus, they believe that getting them settled and inte­grated into Hillsdale is the main goal.

“It’s just hon­estly building rela­tion­ships with them…and having inten­tional rela­tion­ships,” Krusmark said. “And also just making them feel homier at Hillsdale…Students here who are from America get really homesick. And imagine being in a place that’s not even remotely like your culture.”

Inter­varsity approached Krusmark and Martelli about lead­ership oppor­tu­nities for the inter­na­tional stu­dents’ group, and both found that they had per­sonal con­nec­tions with the group. Krusmark’s  mother is from Chile so she grew up in a mul­ti­cul­tural envi­ronment where she ate His­panic food and had people come unex­pectedly to her house at late hours.

“It was a whole culture that was in my life,” Krusmark said. “This friend­liness and this joy and love that are so dif­ferent in some ways from our American culture, so meeting with stu­dents from Kenya or Colombia who actually get this warmth and this culture, I can relate with them.”

Martelli dis­covered her passion for inter­na­tional rela­tions over the summer when she went to Jordan to teach English to Syrian refugees with the English Lan­guage Institute of China, a program ded­i­cated to sending Chris­tians to Asia to teach English as a second lan­guage. Through the ELIC program, her teaching team met the locals, refugees, and other teams.

“I loved the mix of cul­tures and ethnic back­grounds and I loved forming rela­tion­ships with people of so many dif­ferent back­grounds,” Martelli said. “I con­nected really well with the people in Jordan even though I didn’t speak their lan­guage and I came back from that trip with a heart for inter­na­tionals and felt like God is leading me to invest in these relationships.”

The inter­na­tional stu­dents appre­ciated the goal of the min­istry group as well. Kenyan freshman Rachael Kiti said she joined the inter­varsity because it was non­de­nom­i­na­tional and would assist her faith.

“You cannot say it’s Anglican way, you cannot say it’s Catholic way. It’s just a free way…it wel­comes everyone,” Kiti said. “The long-term goal is main­taining my growth in the Christian faith…and at the moment, I expect any­thing good that praises God.”

Vargas Her­nandez said he loves sharing his Colombian culture and learning about others’ cul­tures as well.

“My favorite thing is to see that so many people are very inter­ested in getting to know us, talking to us, and learning things from our coun­tries,” Vargas Her­nandez said. “The people at Hillsdale are all very open to get to know us and that is simply amazing.”

Both Krusmark and Martelli hope to show the inter­na­tional stu­dents how much they love and care for them. For Krusmark, it is important to display the same kind of love Christ displays.

“Jesus has that kind of love where he runs down the dri­veway and he picks us up and wel­comes us,” Krusmark said. “And I want to be that.” 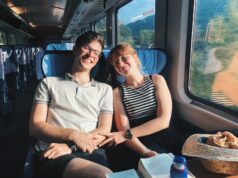