On Sept. 20, the Hillsdale College Fed­er­alist Society hosted Pai, who spoke on the future of digital oppor­tunity.

“Your school’s unique com­mitment to a clas­sical liberal arts edu­cation — to ‘under­standing the good, the true, and the beau­tiful’ — isn’t just excellent prepa­ration for life,” Pai said. “It’s prepa­ration for working in the digital age.”

The sen­timent that tech­nology is a pos­itive factor for job cre­ation is nothing new, Pai said. As arti­ficial intel­li­gence becomes more prevalent in the world, Pai argued that uniquely human qual­ities will only become more valuable. He said the FCC is focused on accel­er­ating the process of tech­nology, not slowing it down.

“If you get into the field of tech­nology, I hope you’ll take the tools you’ve been given here at Hillsdale and help extend the digital rev­o­lution to benefit all Amer­icans,” Pai said.

Pai laid out the groundwork for the actions that his com­mission took on Net Neu­trality, which received a lot of backlash. Pai reminded lis­teners that when the com­mercial internet came to be, Demo­c­ratic Pres­ident Bill Clinton and a Repub­lican Con­gress made it national policy that the internet should not be reg­u­lated by federal or state gov­ernment, in a his­toric bipar­tisan decision in 1996.

“The internet is one of the greatest plat­forms we’ve seen for inno­vation and free expression,” Pai said. “And that’s because we embraced the power of the free market, not gov­ernment, at that critical moment.”

According to Pai, a par­tisan FCC majority aban­doned the original approach in 2015, and put the gov­ernment in charge of the internet.

Pai joked that Twitter still works, as does the rest of the internet.

“You are still able to hate-tweet your favorite FCC Chairman,” Pai said as the room replied with laughter.

“He has a great sense of self-humor,” junior Grace Berner said.“I really appre­ciate that he was able to clarify net neu­trality.”

Pai said that the FCC serves as an example of “what can happen when gov­ernment puts its faith in markets and entre­pre­neurs instead of lawyers and politi­cians.”

According to Pai, the FCC requires trans­parency. Every internet service provider, however big or small, has to dis­close business prac­tices to the FCC and the public. The FCC under Pai is “pro­moting better, faster, and cheaper internet access and com­pe­tition,” he said.

Pai also dis­cussed what he believes to be the future of the digital world, including 5G as the next gen­er­ation of wireless net­works. 5G promises expo­nential growth in the internet and creates a world where every­thing is con­nected, Pai said.

“The 5G future doesn’t have to happen,” Pai said. “5G will simply not come to be if the FCC doesn’t take action on spectrum and infra­structure.”

As far as spectrum, the FCC is working to allow more licensed and unli­censed air­waves in the mar­ket­place. Addi­tionally, the FCC is cutting back reg­u­la­tions that often make it impos­sible to to install infra­structure. According to Pai, on Oct. 1, a major wireless company will launch the first com­mercial 5G home service in four cities across the United States.

Pai’s message res­onated with the packed room of stu­dents.

“I thought he was very enlight­ening and incredibly intel­ligent,” sophomore Braden VanDyke said. “He is a pro­found speaker — the type of person you hear and say: ‘I’m glad he’s the guy in that job.’”

Pai added that as a nation, though we have the world’s best codes, we will stumble if we do not have an ethical code.

“I didn’t expect him to be so funny. I never thought the word ‘meme’ would come out of his mouth,” freshman Anayia Veremis said. “Every­thing he said was very intel­ligent, and I really appre­ciated that he cared enough to do research on the college.”

Pai left the audience of Hillsdale stu­dents with empow­ering words.

“You are car­rying on Hillsdale’s strong tra­dition of grad­u­ating strong leaders,” Pai said. “Leaders who are brave enough to chart a course for our future rooted in timeless prin­ciples of our past.” 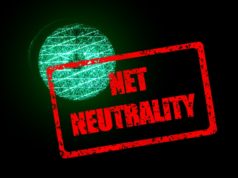 You can still enjoy dank memes without net neutrality