Running a dis­tance longer than 26.2 miles may seem impos­sible to the average person. For Charles Steele, however, it’s his idea of fun.

Steele, an asso­ciate pro­fessor of eco­nomics and the Herman A. and Suzanne S. Det­twiler chair in eco­nomics, is an ultra­runner. He com­petes in ultra marathons, races longer than the 26.2 miles of a standard marathon.Steele has been running since high school, and he first caught the bug when he com­peted in a 10-miler in Great Falls, Montana.

“They had a team com­pe­tition,” Steele said. “One of my brothers, a couple of other guys, and I formed a team. These other guys were all track runners and I beat all of them. I sud­denly realized I could run dis­tance and do it pretty com­pet­i­tively. So I started racing.”

Steele became inter­ested in triathlons and began running local races. He soon decided to begin training for a marathon.

“The marathon I was training for was a small town thing that was can­celed,” Steele said. “I hap­pened to read that a marathon coach from Germany, Manfred Steffny, wrote that if you are trained so you can do a marathon com­fortably, then you are ready to do a race up to 100k.”

Steele had heard about a 50-mile race, the Le Grizz Ultra­ma­rathon.

“I thought, well, I’ll try 50 miles,” Steele said. “I’d never run a marathon. So I ran the 50-miler and I fin­ished it. That was my first ultra­ma­rathon which was before a marathon.”

Le Grizz, located just outside of Glacier National Park, winds 50 miles in the Montana moun­tains gaining approx­i­mately 2,600 ft. in ele­vation. Steele first ran and fin­ished Le Grizz in 1983. After an 11-year absence from the race, he came back to run it again in 1994.

“It’s such a cool event,” Steele said. “The guy who founded this race, Pat Caffrey, used to have his whole phi­losophy of the race online. It was that some people think the sal­vation of man is the wilderness, while some people think civ­i­lization is. He says you actually need both. So, in Le Grizz, you will start in the wilderness and you will run to civ­i­lization, in fear, knowing that there are things out here that are bigger than you are and might think you’re food.”

After returning to the event in 1994, Steele became a con­stant fixture at the race.

“He always had fun,” Le Grizz founder Pat Caffrey said. “I remember he’d always finish with a smile on his face. He still does, which is hard to do in this race. He’s just a real pos­itive person.”

Caffrey ran Le Grizz from its inception in 1982 until 2014 when the Pole­bridge Mer­cantile, near the North Fork of the Flathead River, pur­chased the event.

“It’s out in the wild,” Caffrey said. “It doesn’t start or end in any towns. There’s grizzly bears on the loose. There’s a chance you’ll encounter one. That’s why we call it Le Grizz.”

Runners who finish Le Grizz 10 times receive the 10 Bears award, a clock and grizzly bear statue mounted on a slab of Montana juniper or cedar wood. Steele earned his 10 Bears Den award in 2010 at the age of 55 and has fin­ished Le Grizz a total of 16 times. He’ll go for his 17th finish this October. Steele hopes to earn his Chief 10 Bears award in the next few years, the recog­nition an indi­vidual earns after fin­ishing Le Grizz 20 times. Steele has also run, by his esti­mation, 29 other ultra­ma­rathons.

“The longest one I’ve done is Rocky Raccoon, which is a 100-miler in Texas,” Steele said. “I’ve done some other ones in Montana, Idaho, Wyoming. In Michigan, I’ve done a couple trail runs here. There’s one over in Pinckney, MI. It’s a 50k right at the end of April. I just did Wood­stock, another 50k.”

Steele ran Wood­stock, also located in Pinckney, just a few weekends ago. He was joined by Hillsdale senior Emma McCormick.

“I had heard mention of ultra­running,” McCormick said. “I didn’t get for­mally intro­duced to it until I met Dr. Steele. His running and all he’s done, that’s kind of what got me more inter­ested in ultra­running.”

McCormick did the 50-miler at Wood­stock.

“I thought I knew what ultra­running was,” McCormick said. “I did a 50k and thought ‘eh, that was pretty long’. But then I did the 50-miler, and it’s like a whole dif­ferent sport. It is kind of crazy.”

McCormick says running a race of that length requires a certain men­tality.

Pro­fessor of Political Eco­nomics Gary Wolfram, has run about 100 marathons in his lifetime but has never com­peted in any­thing longer than a marathon.

“Marathoning at least you’re going to run fast,” Wolfram said. “When you start running 50 miles or 100 miles, you’re not going to run 100 miles at a 5 minute pace. I think it becomes more of ‘hey I want to finish’ as opposed to ‘I have a certain time that I want to run.’”

Wolfram never con­sidered running an ultra­ma­rathon as he ran marathons hoping to qualify for the olympic trials.

“Once I started training for that, I was going to be at the front of the race,” Wolfram said. “If I’m going to Detroit to run the Detroit marathon, I’m going to try to win. There’s no chance I’m going to a 50-miler and trying to win it. The oppor­tunity cost of running a 50-miler was just too high.”

For Steele, however, it’s the opposite.

Steele credits ultra­ma­rathons with how he approaches life.

“It’s that endurance men­tality and the under­standing that when you’re trying to accom­plish some­thing it may take a very, very long time,” Steele said. “ Anytime I take a step it is so small that it’s insignif­icant. It’s nothing against 100 miles. Yet, you keep doing one more one more and even­tually you’ve run 100 miles. Always push forward and make progress.” 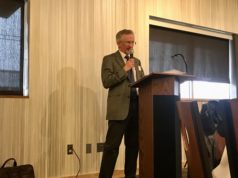 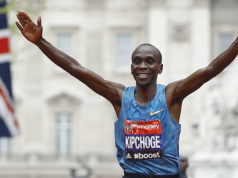 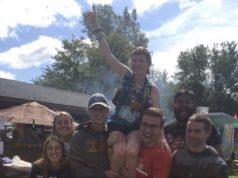