A crowd of men stood around, watching as those ahead of them in line attempted to jump over a rolling log posi­tioned at shoulder height. It was the first obstacle of over 25 in the Fort Custer obstacle course, com­pleted by the men of Koon, Nied­feldt, and Whitley Res­i­dences on Sat­urday Sept. 15.

Asso­ciate Dean of Men Jeffery Rogers led the stu­dents to Fort Custer as the first of many “Man Up” events this school year. Describing the program, Rogers said, “we are setting out to offer our men’s dorms an oppor­tunity to engage in some manly activ­ities.” More events remain in the planning stage.

After an hour-long drive, the men got off the bus and were imme­di­ately lined into for­mation. Rogers used his expe­rience in the mil­itary to lead the men in marching exer­cises, which they would do throughout the day, attempting to strengthen dis­ci­pline and order. Fol­lowing Rogers, they marched to a con­fi­dence course where they were addressed by vis­iting pro­fessor of classics Carl Young.

Young urged the men to live in a truly manly way, quoting from the philosopher Friedrich Niet­zsche. True man­liness, he said, promi­nently dis­plays cheer­fulness and patience. He said that patience is not simply sitting around but is, in fact, per­se­verance through suf­fering. In fact, patience comes from the Latin word patī, meaning “to suffer.”

After the talk, the men pro­ceeded to work through the obstacles, per­forming feats such as scram­bling over high bars, weaving in and out of high ladders, crawling under barbed wire, and using rope to swing across a bar­ricade. Many of the obstacles proved dif­ficult, but everyone had a good spirit about it.

Freshman Rob Laucius said that he was impressed to see how the group sup­ported each other.

“There was the whole group chanting for everybody,” he said. “It was a really strong bond there.”

“I think that it was good, espe­cially from my per­spective as an res­ident assistant, to see my freshmen be encour­aging, kind, and gen­erous and char­i­table to each other.”

However, the majority of the men were unable to finish the obstacle course due to time con­straints.

When the men departed the course, they were fed by the fort staff before assem­bling to hear Pro­fessor of Pol­itics Adam Car­rington speak. Car­rington uti­lized the famous St. Crispin’s Day Speech from Shakespeare’s “Henry V” to show what true manly friendship can be.

The event helped men to inter­mingle, drawing the dorms closer together, Laucius said.

“It helped me to bond with some of the guys that I haven’t gotten to know really well,” Freshman Stephen Whitney said. “I met a few new people.”

“I think the energy there was very pos­itive, very uni­fying,” he said. 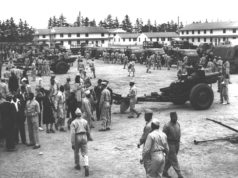 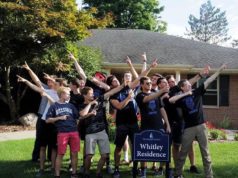