The Hillsdale College Chargers extended their Home­coming winning streak to four in a decisive 41 – 7 victory over the Lake Erie College Storm. The Chargers improve to 3 – 1 and 2 – 0 in the G‑MAC, while the current senior class remains unde­feated in Home­coming games.

“It means a lot to me. It shows me that some of my hard work is paying off somewhat,” Brock said. “I credit my coaches for putting me in sit­u­a­tions to make plays and I credit [Senior quar­terback] Chance [Stewart] and the rest of the offense for doing that as well.”

Brock’s breakout per­for­mance comes after a frus­trating start to the season. An abdominal injury limited him in the season’s first two games, and he caught just six passes in the first three games com­bined.

Brock also caught his first touchdown of the year in the fourth quarter with an impressive grab at the goal line.

“He’s one of those kinds of players you just don’t see all the time, and to be able to be here with him for four years and be his quar­terback, it’s special,” Stewart said. “I’m really excited for him, and I know he’s got way bigger goals than that, so his expec­ta­tions are so high that he’s going to keep going and we’re going to keep motoring.”

Stewart con­tinued his strong start to the season, com­pleting 17 of 25 passes for 239 yards. He also carried the ball 11 times for 39 yards and a touchdown.

The Chargers, who put up 54 points against the Storm last season, didn’t even get on the board until late in the first quarter on Sat­urday, when junior running back David Graham ran for a 15-yard touchdown with five seconds left in the quarter.

After the touchdown, sophomore kicker Joe Philipp exe­cuted an onside kick, giving the ball back to Hillsdale’s offense. The Chargers took just two plays to add another touchdown, a five-yard rush by Graham.

Graham’s two rushing touch­downs gave him five for the season, tied for most in the con­ference. He carried the ball 12 times for 52 yards total against Lake Erie.

Junior running back Christian Shepler also made an impact out of the back­field, car­rying the ball five times for 52 yards, including a season-long 42-yard rush on the Chargers’ first scoring drive.

“We’re always looking for room to improve, but I think the rotation is doing really well,” Graham said of the team’s depth at running back. “It’s always a good thing to see more guys being able to con­tribute.”

Despite the margin of victory, Lake Erie remained com­pet­itive through the first half. The Storm moved the ball effec­tively on mul­tiple drives and dom­i­nated the time of pos­session in the first two quarters.

“I thought we started out a little lack­adaisical. We didn’t really start the game as well as we wanted to,” Stewart said. “I didn’t think the offense came out as sharp as we wanted to. But at the end of the day, scoring 41 points, we’ve gotta be happy with it.”

Even­tually, Hillsdale’s play­makers proved to be too much for the Storm. Late in the second quarter, with Lake Erie in the red zone, junior defensive back Drake Temple inter­cepted a pass and returned it 70 yards to set up a field goal for Hillsdale before halftime.

In the second half, sophomore defensive linemen Zach Van­Valkenburg and Schuyler Snell’s pass rush forced Storm quar­terback Javarian Smith to get rid of the ball quicker with less time to find open receivers.

Through four games, Hillsdale’s defense leads the G‑MAC in fewest points allowed per game, at 16.2. It limited the Storm to just 32 yards from scrimmage in a dom­inant second half.

“In the second half, we just tightened down, defense got off the field on third down a little bit, and we punched it in,” head coach Keith Otterbein said. “I felt like we had a good tempo going throughout the game.”

Hillsdale’s final touchdown of the game came on sophomore backup quar­terback Ty Cox’s 10 yard scramble in the fourth quarter. Lake Erie’s defensive strategy allowed Hillsdale to execute the read-option scheme suc­cess­fully throughout the game, according to Stewart. That exe­cution led to a bal­anced offensive attack: 239 yards through the air and 189 on the ground.

The Chargers travel to Malone Uni­versity in Canton, Ohio, on Sat­urday. Kickoff is at 2 p.m. Hillsdale defeated the Pio­neers last season, 45 – 7.

“I think our guys have a little bit of con­fi­dence going right now. They feel good about them­selves,” Otterbein said. “It won’t be hard to make them practice. They’ll show up ready to practice hard and prepare and be ready to go, and that’s all you can expect. Then you’ve got to go make plays on Sat­urday.” 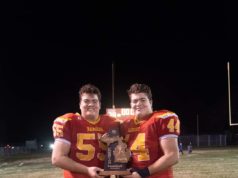