After pro­fessor of art Bryan Springer designed a new font in the summer of 2017, he com­pared the process to climbing Mount Everest — but said that he would do it again.

Along with the rest of the class, Springer first focused on drawing letters by hand and then drawing them dig­i­tally. They finally tran­si­tioned into typog­raphy. On their last day of the program, stu­dents pre­sented their newly-designed fonts.

Springer found his inspi­ration from the Belle Époque, a period of nat­u­ralism related to during the Art Nouveau move­ments at the turn of the last century in Paris and Barcelona. This movement spread throughout Europe and America, inspiring long lines with flowing curves in interior design and archi­tecture, much like the lines of Springer’s font.

“I was really inspired by script type­faces or cal­li­graphic letter forms. As a part of this course we studied hand­writing in practice and applied it to our designs for digital typeface,” he said. “I looked at time periods that were known for really dec­o­rative and lush letter forms.”

Courbelle is designed for dec­o­ration and display, Springer said. Its form isn’t nec­es­sarily con­ducive to long para­graph forms, but can be used for the names of products, designs on signs and headings.

Springer said he par­tic­i­pated in the res­i­dency not only because of his per­sonal interest in typog­raphy, but also so he could expand the college’s graphic design minor.

“We launched an intro­duction to typog­raphy class in spring of 2018 and I think it went very well,” Springer said. “I would like to modify some things to make it more effective and effi­cient, of course, but I think that’s what most pro­fessors do to keep it fresh.”

Senior Ethan Greb par­tic­i­pated in Springer’s inau­gural typog­raphy class in the spring of 2018, as well as his Graphic Design and Color Theory classes.

“As a pro­fessor, Springer engages his stu­dents in a very unique way,” Greb said. “ He knows more about Adobe products more than anyone else I know and is extremely helpful in the way he teaches design ele­ments. Pro­fessor Springer fits right in the art department through the unique look at art he pro­vides and the way he relates to stu­dents.”

Greb said he thinks the font lends itself to a very unique and niche for use, and has a very nice, sleek design.

Senior Anne Buzzell has had Springer for several classes, including typog­raphy. She called his new font “an inter­esting com­bi­nation of mostly straight lines with script-like details on the letters’ serifs.”

Springer said the increased pop­u­larity of typog­raphy could be a result of digital alien­ation, and people’s desire to see beauty and cre­ativity in their products.

“I think typog­raphy is popular right now because it’s a reaction to the static coldness of the com­puter. People are trying to express more real beauty in letter forms that we might find in letter press or hand-written cal­lig­raphy,” he said. “I think trying to bring that level of realism and beauty to the com­puter is an important thing to make it dif­ferent and attractive and more real.”

Springer said typog­raphy is a dif­ferent kind of art: Not only is it aes­thet­i­cally pleasing, but it is also a way of com­mu­ni­cation.

“It is very much a part of a visual designer’s lan­guage. You can’t express visual content effec­tively without typog­raphy,” he said. “Typog­raphy intro­duces com­mu­ni­cation whereas illus­tration and painting don’t as much. The form and function of typog­raphy are to delight and evoke a pos­itive response, and to com­mu­nicate effec­tively.”

Designing a font requires extreme attention to detail, focusing on each letter’s form and even the amount of space between each letter.

“For me the joy is in sketching the forms before I even get to the com­puter,” he said. 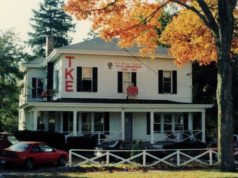 Tau Kappa Epsilon: ‘The legends are all true’