Almost 14,000 Catholics met at the Breslin Center in Lansing on Sat­urday, lis­tening to Bishop Earl Boyea’s reminder that they are “Made for Hap­piness” as the assembly’s theme sug­gested. Those who gathered made up 22 percent of the Lansing Diocese’s church-going pop­u­lation, according to a news statement from the diocese. The assembly goers had the oppor­tunity for prayer, lis­tening to speakers, ended the day with a Mass.

St. Anthony’s Catholic Church in Hillsdale sent over 200 parish­ioners and college stu­dents, who began the day with a 3.6 mile eucharistic pro­cession beginning at St. Mary’s Cathedral in downtown Lansing and then passing by the Michigan State Capitol before ending at the Breslin Student Activ­ities Center.

The assembly was the third to be hosted by diocese.

Boyea said, as he opened the day’s con­ference, that the first assembly was in 2014, when 800 were in atten­dance: priests, deacons, and employees of the diocese.

Several speakers from around the country joined to share the message of the day, which revolved around evan­ge­lization and the Great Com­mission, as included in the gospels.

Father Mike Schmitz is a priest from the Diocese of Duluth, Min­nesota where he works in youth and young adult min­istry for the diocese and as a uni­versity chaplain.

Sophomore Bridget Breckler said his talk was one of the high­lights of her expe­rience.

“He was talking about trusting in God in the midst of suf­fering, pain, and uncer­tainty,” she said. “As each of us grow into adults, we go through that, on our own, but in Christ.”

She saw the day as an out­pouring of graces.

As Boyea sent those in atten­dance home, he declared a year of prayer for the Lansing Diocese.

Senior Jimmy McGrath said the day was full of “awe-inspiring” and “vis­ceral” moments, in par­ticular the eucharistic pro­cession.

“What I took away from it was unity,” he said.

“The past few months have been rough for the Church, but the day was full of tan­gible signs of hope for the future.” 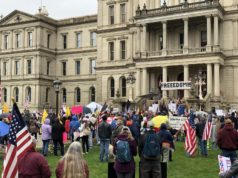 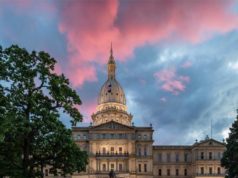 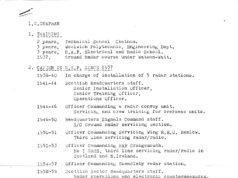