Julio Suarez, assistant pro­fessor of art, sees the world in a series of abstract shapes and colors inter­acting with each other.

“I’m very inter­ested in color, in mixing,” Suarez said. “Every­thing is made up of color, a mosaic that makes up our visual field.”

In his upcoming art show, titled “The Shape of Color,” Suarez will display mul­tiple works from about the last four years that reflect his artistic vision.

“His title, ‘The Shape of Color,’ is very telling in regards to his artistic approach,” Pro­fessor of Graphic Design Bryan Springer said. “The way he designs his com­po­si­tions with light and shadow, and of course, color. He’s been intro­ducing a lot of the same approaches to his teaching and stu­dents and we see more of that approach evident in his student work.”

Springer said that Suarez believes in a tra­di­tional approach to art, and the work his stu­dents pro­duces is strong. At the show, which will be located in Daughtrey Gallery in Hillsdale’s Sage Center for the Arts, viewers may see the tactile quality of Suarez’s work, as Springer describes it.

“He has a very fresh brush stroke,” Springer said. “The structure of the paint on the canvas also plays a part in his work.”

Held from Sept. 7 to Oct. 15, “The Shape of Color” is the first of the Hillsdale College Art Department’s Pro­fes­sional Artist Series, free annual exhibits open to the public, according to a flyer. An artist’s reception will be Sunday, Sept. 16, from 3 p.m. to 5 p.m.

Suarez encourages people to come and see the art for them­selves, saying, “It’s important to talk about it, but in the end it’s about looking. I don’t want to say too much. I want the people who look at the show to have their own expe­rience. I would love to have as many people as pos­sible come look at the work and let me know what they think.” 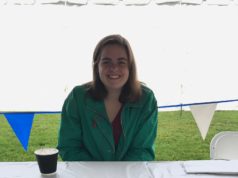