Hands shaking, Brad Monas­tiere marked a “1” in Grand Valley State University’s loss cat­egory on the stat sheet from his vantage in the press box. It was Hillsdale College’s 2009 Home­coming football game, and the Chargers had just stamped out Grand Valley’s 48-game winning streak with a 27 – 24 victory.

“I was like, no one’s done this for five years,” Monas­tiere said. “And I got to do it because our team beat them.”

Nine years later, Monas­tiere remembers that Home­coming as “the perfect day.” Though recording stats at Charger ath­letic games is just one of many hats Monas­tiere wears as Hillsdale’s assistant ath­letic director for media rela­tions and event man­agement — infor­mally titled “sports infor­mation director” — he con­siders it one of the most mean­ingful.

“I very much view myself as a his­torian, of chron­i­cling what we do across all the sports and having that become part of a per­manent record,” he said.

Though he’s cor­nered out of sight in the press box or the bas­ketball table at Charger home games, metic­u­lously recording stats (the one task he won’t del­egate), Monas­tiere is the com­mu­ni­cation hub for Charger event coor­di­nation and pro­motion. Besides recording stats, Monas­tiere runs social media for the Chargers, uploads athlete pro­files and game recaps to the website, orga­nizes team photos and sorts through game-day pho­tog­raphy, and designs home-game pro­grams. He’s also the chairman of Hillsdale’s Ath­letic Hall of Fame — he coor­di­nates the nom­i­nating com­mittee meeting, sends the com­mittee infor­mation on potential inductees, and plans the hall of fame banquet.

“He’s so invested in our pro­grams and our kids,” said John Tharp, the Chargers’ head men’s bas­ketball coach, who traded office visits with Monas­tiere — partly for Monastiere’s M&M stash — since becoming the coach in 2007. “He is kind of ‘Mr. Hillsdale Sports.’”

Monas­tiere joined the Chargers in June 2005, after spending a year and a half as sports editor at the Hillsdale Daily News. Monas­tiere has no “average day,” and rarely runs on a 9‑to‑5 schedule. He works about 40 weekends every year, and the beginning of the school year — with the football and vol­leyball seasons coin­ciding — presents a par­ticular time crunch.
Shoul­dering such a load, he’s single-minded in his inspi­ration.

“I’m in this frankly because I love our student ath­letes at Hillsdale College,” he said. “We bring the best here. You know their char­acter is high, you know they’re high achieving people, and you know they’re going to do just amazing things when they leave here.”

Besides pro­moting them in his job, Monas­tiere hires stu­dents to help cover games, too.

Junior Samantha Catron, a softball player who has called stats during games for Monas­tiere since the fall of her freshman year, said he’s “probably the best boss you could ever have.”

Monas­tiere is con­sid­erate of his student workers’ schedules, making sure they have the hours they need but can take time off to focus on aca­d­emics, Catron said. He trusts student employees, young as they are, which she said she’s grateful for.

Junior Paige Van­derWall, a Charger vol­leyball player, has also called stats for Monas­tiere and helped him with graphic design work. Monas­tiere always has food for stu­dents before the games where they call stats, she said.

“Most all of us come straight from practice, so it’s really thoughtful that he looks out for us and makes sure we get a meal,” Van­derWall said in an email. “Just little thoughtful things like that are what make Brad a standout [sports infor­mation director] across the board, and I know everyone that works for him appre­ciates those things!”

Though his care for student ath­letes has held strong during his nearly 14 years at Hillsdale, Monastiere’s job has evolved. When he joined in 2005, a Facebook account required a “.edu” email address, he said. Now, he’s set up the full-fledged social-media suite — Facebook, Twitter, and Instagram for the Chargers — except for Snapchat, which he said he won’t stoop to.

“You have to con­stantly evolve,” he said. “I’m trying to have recog­nition of what the fans demand — how do we promote our student ath­letes in the most effective way?”

Tharp affirmed that Monas­tiere is a huge asset to all the sports teams, con­stantly looking out for their interests.

“You know when there’s big games, Brad’s going to be there one hundred percent,” Tharp said. “He lives and dies with you.”

“I just don’t think people know how much Brad does for the school, and the amount of care he has for student ath­letes is unbe­lievable,” Catron said. “You’ll never find a Hillsdale Charger fan like him.” 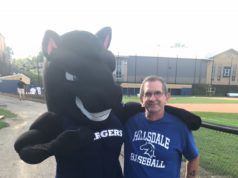