I didn’t realize how much I appre­ciated the college’s vis­i­tation restric­tions until one evening during vis­iting hours when I walked out of my room in a bathrobe.

It seemed to swallow me up in white fluffiness, stretching past my ankles and wrists. The robe is a large, and I’m pretty small.

Mauck Res­i­dence, where I live, has com­munal bath­rooms and I was going to take a shower. As soon as I stepped into the hallway, I noticed one of my dorm-mates walking toward me with her boyfriend. A little embar­rassed, I averted my eyes and con­tinued walking.

It was awkward. I could only be grateful for the excess modesty offered by my bathrobe, or else it might have been a lot worse. It was then that I realized I was affected by other people’s guests, and I should pay more attention to vis­iting hours.

Vis­iting hours define times that men and women are allowed in each other’s dorms, typ­i­cally enforced by a res­ident assistant. Men are allowed in women’s rooms from 7 p.m. to 11 p.m. on Tuesdays, 12 p.m. to 1 a.m. on Fridays and Sat­urdays, and 9 a.m. to 7 p.m. on Sundays. Men’s dorms are similar, but they allow women on Wednesdays and not Tuesdays.

Stu­dents often crit­icize vis­iting hours as con­tra­dictory to Hillsdale’s emphasis on self-gov­ernment. Maybe these stu­dents are actually offended that their judgement is called into question. Maybe they just want more alone time with a sig­nif­icant other. Based on my expe­ri­ences with young people, I suspect the latter is fre­quently the case.

Com­plaints about vis­iting hours are rarely founded in argu­ments with actual sub­stance. The rules do limit the freedom of some stu­dents, but they are good for those stu­dents, their neighbors, their room­mates, and for dorm culture overall.

Last year, Simpson res­ident Luke Grzywacz, a freshman at the time, objected to vis­iting hours in a statement in the Col­legian. “Lim­iting the vis­iting hours pre­tends that college stu­dents don’t stay up with people who are not the same gender as them past mid­night,” Grzywacz said. “We’re a college that pro­motes indi­vidual respon­si­bility, but we don’t trust our stu­dents to interact with each other in a private setting without having some sort of dra­conian vis­iting-hour rule in place. It’s kind of absurd.”

The word “dra­conian” means cruel and severe, according to Merriam-Webster dic­tionary. It is a ref­erence to the Athenian law­maker Draco, who was known for his unfor­giving leg­is­lation. In 621 B.C., Draco pre­scribed the death penalty for anyone who stole a cabbage. As any Harry Potter fan could likely tell you, the word “draco” also means dragon in Latin, which brings to mind amusing images of a fire-breathing Smaug guarding the innocent women of Olds Res­i­dence.

There are obvious reasons why the college admin­is­tration might not want to take the risk that stu­dents will fail to control them­selves around the opposite sex. Most stu­dents in dorms are living inde­pen­dently for the first time in their lives, and rules can help them make rational deci­sions.

Further, Pres­ident Larry Arnn men­tioned in his spring con­vo­cation address that the rare cases of sexual mis­conduct and other forms of sexual immorality at Hillsdale College have typ­i­cally occurred off-campus. Vis­i­tation hours likely play a role in keeping the dorms safer.

But these are not the only reasons that the rules exist. Vis­iting hours are for my former neighbor who, after returning from swing dance club around mid­night every Friday night, would sit in our hallway until her roommate’s boyfriend left their room at 1 a.m. (It wasn’t fun, but at least it wasn’t longer.) Really, vis­iting hours are for anyone who would prefer that a roommate’s boyfriend or girl­friend leave their room at some point during the night.

Vis­iting hours are also for those who are con­cerned with privacy. They give the men of Simpson the ability to run around in whatever state of dress they desire without dis­tressing females, and bathrobe-clad women greater freedom to roam hallways free of males. 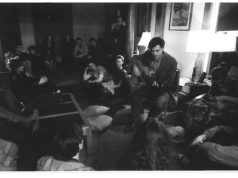 Students get ready to Mock Rock 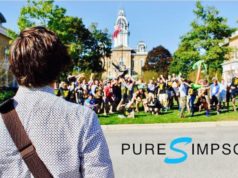 A dorm isn’t just a place to sleep: What Simpson teaches us about community