The Chargers dom­i­nated with a total of 17 runs and 34 hits over the course of the tour­nament, plus three shutout games from freshman pitcher Erin Hunt and strong defensive play overall.

“With the hitters that we have, espe­cially at the top of the lineup, but throughout the lineup, it was inevitable that we were going to score some runs,” head coach Joe Abraham said. “Then when you combine the best pitcher in the league with a really, really solid defense, it’s hard to score against us.”

The Chargers started the cham­pi­onship game with an early lead when a double from sophomore shortstop Sam Catron scored junior out­fielder Katie Kish in the top of the first inning, fol­lowed by runs from sophomore out­fielder Vic­toria Addis and sophomore catcher Sydney San Juan in the second inning. The Chargers added another run in the fifth from freshman first baseman Emma Johnson.

Although the Chargers only outhit the Pan­thers 11 – 10, a strong defensive effort from the and four strikeouts from Hunt held the Pan­thers to a single run — the only run allowed by Hunt during the entire tour­nament.

“Erin, along with Coach Z and Julia Sayles and Alexis Newby, who help him call the pitches, had to work really hard to get the Ken­tucky Wes­leyan hitters out in that last game,” Abraham said.

This was in part due to the fact that Hillsdale had just played Ken­tucky Wes­leyan the day before, with the Chargers winning 4 – 0.

Just as in the cham­pi­onship, Hillsdale took an early lead thanks to a 3‑RBI home run from freshman out­fielder Natalie Walters that scored freshman catcher Madison Stoner and Addis home in the second inning. In the third, a one-run single from senior third baseman Kelsey Gockman brought junior second baseman Amanda Marra home.

From the pitcher’s circle, Hunt struck out eight batters and allowed only three hits.

“Trevecca had pretty much their entire lineup that was voted all-league, but Erin just com­pletely dom­i­nated them,” Abraham said. “Then we got runs right off the bat, which we haven’t done too much this year, so offen­sively and defen­sively, we set the tone from the first inning, and never really let up throughout the entire tour­nament.”

Hillsdale’s own all-con­ference players: Kish and Hunt, who were named first-team all-G-MAC, and junior shortstop Jessica Taylor, who was named hon­orable-mention all-G-MAC, each made major con­tri­bu­tions in the game against the Trojans: Taylor hit a 3‑RBI homer in the fourth inning, and Kish went 2‑for‑2 with two runs and an RBI.

“Katie Kish has been a rock at the top of the lineup,” Abraham said. “She’s hitting roughly .500, getting a couple hits a game, always on base.”

Hunt pitched her first shutout of the tour­nament, striking out 12 Trevecca batters and allowing only three hits over the course of six innings.

Later that day, the Chargers pulled out a tight 1 – 0 win against the Cedarville Yellow Jackets in what proved to be a battle of the pitchers. Hunt struck out 10 Cedarville bats and allowed only two hits over the course of the game. Freshman first baseman Emma Johnson hit in the lone run of the game with a two-out single in the top of the fifth inning.

“Emma was 2‑for‑2 for the weekend in really big times,” Hunt said. “That was huge for our team and helped build momentum, and then there were some great plays in the out­field that saved us as well. It really was a team effort, which was amazing.”

Gockman said the Cedarville win gave the team momentum as they advanced through the winner’s bracket.

“There was a big shift in the team spirit,” Gockman said. “Once we started to win and realized we had a chance, our con­fi­dence just went through the roof and we realized that there was nobody that was going to beat us twice. We were good enough to beat anyone that was there, so it was awesome to see that, espe­cially with some of the younger players that come in not nec­es­sarily coming in with that kind of con­fi­dence.”

“They went out there in the tour­nament and they just played their game,” Abraham said. “Our goal all year is to get good pitching, take outs when we can get them on defense, and just score a couple runs here, a couple runs there, and make teams beat us. We did that suc­cess­fully in all four of those games.” 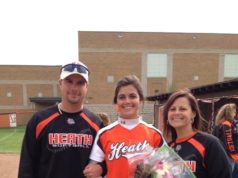