In the Bon Appétit Café, Alexis Zeiler spots the dif­fer­ences between when she started at Hillsdale College in the fall of 1998 and today — three weeks shy of when she’ll graduate with the class of 2018.

This, she points out, wasn’t here before. We also had way fewer options. In par­ticular, she likes the expanded salad bar.

Zeiler was 17 when she started at Hillsdale (she skipped kinder­garten). Fin­ishing her bachelor’s degree of science in biology 20 years later, she says she fits in more boxes than the average senior.

Zeiler left after her junior year, in 2001. She realized she couldn’t follow the family foot­steps and become a doctor, and she couldn’t keep taking upper-level biology classes that pushed her toward that goal. She quit her job at Savarino’s, now Johnny T’s, one year later, and moved with her best friend, and now sister-in-law, Sarah, to Bowling Green, Ohio.

She sold insurance and helped Sarah with her master’s thesis until her family needed her at the family business, a full-service truck stop in Lansing, Michigan. She worked there from 2003 until her family closed the business in 2009, after raised fuel taxes drove them out of business.

It took Zeiler 12 years and the impetus her fiancé, Seth, to get her back to Hillsdale. Seth also encouraged her to finish her bachelor’s degree, but not put her life on hold to do so. She has taken one class a semester since 2014.

While at Hillsdale the first time around, Alexis dated Seth so he could practice talking to women —  a favor to Sarah. Once it stopped being a test-run, however, Sarah broke them up when she whisked Alexis to Bowling Green. The two recon­nected at Alexis’s 30th birthday party, and married at St. Anthony of Padua Catholic Church Hillsdale in 2013, the same year and the same church where Alexis con­verted to Catholicism.

Two years later, on Feb. 16, 2016, she was due any day with baby Charlie when Seth col­lapsed while they were timing con­trac­tions. He died of a heart attack in the hos­pital the next night, and Charlie was born Feb. 20.

While Kelly Cole met Zeiler in college, when they were res­ident assis­tants in Whitley Res­i­dence, it wasn’t until Alexis and Seth married and Alexis became pregnant did the two women start talking reg­u­larly. After Seth died, Cole stepped in, coor­di­nating home visits for Zeiler.

“It was a beau­tiful example of how the body of Christ works together to help someone,” Cole said. “She was ready to cry, I was ready to cry, the gen­erosity of humankind is astounding even though you hope and pray you’re not in a sit­u­ation like this, but people are called to help you because of your grief or mis­fortune.”

Since then, she’s juggled man­aging the Jonesville Dollar Tree full time (50 hours, including commute), a “paint-by-numbers” easy job that allows her to raise Charlie, 2, devoting three to five hours a week to school, and ful­filling church oblig­a­tions, including planning and exe­cuting the yearly Greek Feast at St. Anthony’s.

“She’s given so much to St. Anthony’s with the Greek Feast and other ways she’s helped,” Cole said. After Seth died, Cole said, people learned that the woman behind the feast Easter 2016 was a 5‑week post­partum, 5‑week widow. People responded by vol­un­teering with the feast, cleaning up her yard, and offering to hold Charlie so Zeiler could have quiet time after mass.

“The realness of her faith is com­pletely undoubtable. I’ve talked to much older widows who cited her as inspi­ration for them to just keep going, saying how can they, who had 50 years with their hus­bands, be bitter when Alexis is not?”

Cole said Zeiler always does what she needs to do to the best of her abil­ities.

“I’m so inspired by her,” Cole said. “Alexis, are you really so real? I’m just so proud of her, but proud is the right word because I need to have con­tributed to her to be proud of her accom­plish­ments, but it’s just amazing.”

Zeiler’s achievement became real when she saw the com­mencement program.

For Pro­fessor of Biology Frank Steiner, who is working with Zeiler  on her senior project, getting back into her work was just a matter of jump-starting after being out of the sci­en­tific mode for so long.

“To pick up where she left off is a huge enough hurdle to overcome,” he said, adding that she did some­thing not everyone would be able of because she was willing.

Part of that hurdle was over­coming a knowledge gap. For example, when she started in 1998, human genome sequencing was just devel­oping. Now, she said, she can send a swab of saliva to 23andMe — a private biotech­nology company — and get her genealogy data kit in a week.

“The advancement in tech­nology between then and now is unbe­lievable,” she said.
So she had to play catch-up. In class, she had her phone, com­puter, and notepad open across two desks because she was con­stantly looking up words that “normal” stu­dents would know, which amounted to French or Greek to her. She starred, under­lined, and high­lighted con­cepts to look up after class.

Yet Steiner sees this as an advantage over current stu­dents, who lack Zeiler’s 20 years of his­torical per­spective.

“She’s very astute, quick to pick up and see the sig­nif­i­cance and appli­cation,” he said. “Maybe a little bit quicker than others, and I think that’s partly to do with her life expe­rience.”

For example, during her biology comps, she was 39 weeks pregnant. While she couldn’t fit in the folding desks, she could answer all the preg­nancy ques­tions.

“I got out of there and the other stu­dents were like, ‘Well, I wish I was pregnant because then I would know all the answers to all those preg­nancy ques­tions!’ I was like ‘No, because preg­nancy brain is a real thing and that would make this so much harder than if I had taken this years ahead of time.’”

Cole said she hopes people don’t brush Zeiler off because she’s in her late 30s: “These stu­dents, do they have any idea what they could be learning from her? Do you know what a gem you have in your presence?”

One semester, all she took was bowling, to fulfill the noto­rious second P.E. credit of the early 2000s that forced many out to Hillside Lanes. Zeiler’s last English class was an inde­pendent study with Pro­fessor of English Lor­raine Murphy, who let Alexis breastfeed during class.

“I don’t know how many pro­fessors would let me bring in my infant son and nurse him while we were talking about Great Books,” Zeiler said. “She’s fan­tastic.”

For her 12 elective credits, she opted to take hybrid in-class and online courses (Hillsdale doesn’t transfer online-only classes) at Jackson College, since they were $200 instead of $900.

“The dif­ference between Jackson and Hillsdale is like high school and college,” Zeiler said, spec­u­lating that the 12-credits worth of work at Jackson College amounted to one Hillsdale class. But the amount of work and the caliber of stu­dents grew between the Hillsdale of the 1990s and now; she said the stu­dents here now are “a step above.”

But while she remembers bygone campus fix­tures like the Kresge Hall between the library and Central Hall, and being able to drive up to Central Hall, one thing stays the same.
“The biggest thing that is the same is that every student at Hillsdale College wants to change the world,” Zeiler said. “Every single person that I’ve ever met that comes here has a big vision or big dream of how they’re going to impact the world, and that’s never changed.”

She’ll freely admit that she still doesn’t know what she wants to be when she grows up, and that in the last month and a half, eight people have asked her if she will open a restaurant in Hillsdale.

While it’s not the right time to embark on such an all-con­suming project, she knows for sure she’ll keep living in Hillsdale, in Seth’s grandparent’s house on the Zeiler Family Farm.

“Where I live was my husband’s happy place, his favorite place on earth,” she said. “That’s really the only way that [Charlie] is going to have a con­nection with his dad, is through similar mem­ories to those of his father, and being around his father’s family. He’s got aunts and uncles that live on either side, his grand­mother is right down the road. Every single neighbor knew my husband.”

She high­lighted the “little things” in a small-town com­munity, like when her neighbors moved an old playset their sons didn’t use anymore from their yard to hers for Charlie to use.

“I really want people to almost ran­domly go up to my son and tell him stories about his father, and if I move, I lose that,” she said. “I think those little pieces, those little stories, are how he’s going to have a good grasp of his dad.”

“She’s just such an example of con­tinuing to do the right thing, seek God’s will even when things don’t go at all the way you planned,” Cole said. “It’s a lesson anyone can take and learn from.” 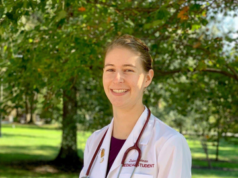 Hillsdale promotes interest in both M.D. and D.O. programs

Anthony Esolen should speak at 2017 commencement