Com­muters who take West or College street home may have to take a detour Monday afternoon.

Con­struction on the College Park town­houses at West and College hit a two-inch natural gas main line Monday afternoon, causing the fire department to close down the inter­section, according to local offi­cials. Michigan Gas Util­ities workers are on scene, replacing the pipe’s steel casting with a plastic one since learning about the leak at 1:30 p.m.

Michigan Gas Util­ities spokesman Matt Cullen said the repairs are expected to con­tinue throughout the night.

The city dis­patched the fire department at 2:28 p.m. as a pre­cau­tionary measure and to direct traffic from campus to go east of West Street.

The break is not affecting any nearby buildings or homes. Those near the inter­section, however, may hear the gas leak, which sounds like a jet flying overhead.

“Those nearby may hear a hissing sound,” Cullen said. “The leak is blowing gas up into the air at this point, and it may cause a rotten egg smell, but we do have crews on scene.” 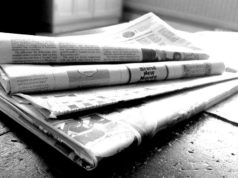