Hillsdale theater stu­dents swept two award cer­e­monies across the country this year at both the The Kennedy Center’s American College Theater Fes­tival and the DePauw Under­graduate Honors Con­ference for Com­mu­ni­cation and Theatre.

Every year, Brandon takes the top papers from the class and submits half to the American College Theater Fes­tival and the other half to the DePauw Under­graduate Honors Con­ference in Com­mu­ni­cation and Theatre. This year, the Hillsdale stu­dents ranked in both com­pe­ti­tions.

Benson is a junior theater and English major who has been involved with the Tower Players and the theater department since his freshman year. Benson’s paper on the origins of theater won him the Under­graduate Theater Scholar Award at the fes­tival, along with a $1,000 cash prize, and a free trip to the fes­tival in Wash­ington, D.C. in April.

“My paper was about Anglo-Saxon oral poetry and early medieval litur­gical drama,” Benson said. “My argument is that we can actually posit an early foun­dation for the origins of theater, par­tic­u­larly in medieval England, with this tra­dition of Anglo-Saxon per­for­mative oral poetry.”

Dignoti, Buursma, and Rohman’s papers were all selected for the DePauw Con­ference. DePauw gen­erally accepts about 36 papers from across the country. Selected papers are assigned to a pro­fessor, who acts as a mentor to a group of 10 or 11 stu­dents. They work in groups and one-on-one with the pro­fessor to cri­tique and improve their work.

Buursma’s paper focused on the history of Indian theater, and the 12 forms of dance dramas, while Rohman’s cen­tered around the sim­i­lar­ities between Greek tragedies and Japanese Noh drama and what these sim­i­lar­ities indicate about the his­torical devel­opment across cul­tures.

“This con­ference is great because it is really important to take your work outside of a safe place. At Hillsdale, you know your pro­fessors, your audience, the expec­ta­tions,” Brandon said. “To take your work out to people in the field who are not in your space is brave and nec­essary to become a scholar. For our Depauw stu­dents, this is some of the first steps on the way to real schol­arship.”

Dignoti, a theater and history major, has also been involved with the theater department since his freshman year, and said he has enjoyed the oppor­tunity to combine skills from both of his majors into his paper.

“My paper cen­trally focused on the Sopho­clean tragedy Antigone and how it has developed into mul­tiple modern adap­ta­tions today ranging from the early 1910’s by Walter Hasen­clever to Bertolt Brecht in the 50s,” Dignoti said.

Dignoti said he is eagerly awaiting the con­ference and the oppor­tu­nities it will give him to grow as a writer.

“I am looking to actually seeing if my work is rel­evant in the larger theater world, and if people are inter­ested in reading the things I like to write about,”  Dignoti added.

Brandon said he is immensely proud of all his stu­dents in their endeavors and accom­plish­ments in this process.

“I have always taken schol­arship in a theater program to be of tan­ta­mount impor­tance,” Brandon said. “It is good to have that reas­surance from the outside world that what we are doing here is top-notch schol­arship, and I want my stu­dents to keep engaging in it.” 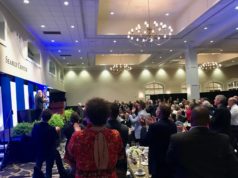