Flying back from Boston after spring break, senior Susena Finegan remem­bered she was going to sing a solo in the orchestra’s per­for­mance of “Steal Me Sweet Thief,” an aria by Gian Carlo Menotti. After placing in January’s con­certo com­pe­tition, Susena will sing the song from “The Old Maid and the Thief” along with the orchestra on May 10.

On the plane, she took out her score, put her earbuds in, and played the song. Then, despite the tight quarters of the air­plane, she began waving her arm in a con­ducting pattern.

After a few moments, her neighbor turned to her and said, “Wow, are you a con­ductor?”

It is a question that Susena scarcely believed anyone would ask her four years ago.

A graduate of Hillsdale High School, Susena par­tic­i­pated in dif­ferent school choirs, as well as the Hillsdale Arts Chorale, and sang solos of con­tem­porary Christian music for her con­gre­gation growing up.

But those expe­ri­ences don’t make a com­plete musician, espe­cially because until her freshman year, Susena had never had any private voice lessons.

For her vocal audition to earn a schol­arship to the college, she knew no appro­priate reper­toire. She had to learn arias in dif­ferent lan­guages.

“There was a voice in there that I could hear, but it was tough getting it out,” Pro­fessor of Vocal Music Missy Osmond said. “Every once in a while it would come out and she would just about scare herself.”

Osmond and Susena admit there were problems in the beginning: sloppily intoned words, imprecise pitch, rhythmic inac­curacy. But they also agree those problems hardly exist these days.

In one of her last rehearsals before her per­for­mance, Osmond, Susena, and senior accom­panist Mar­garet Odell gather in Osmond’s office. Susena drops her music onto a piano and the trio decide to move the lesson to Conrad Recital Hall.

Susena kicks her shoes off, drops her music folder on a stand a few feet away. She never opens it. Odell sits down at the piano and with a nod they launch together into the aria.

All the doors are wide open,

all the drawers are unlocked!

He neither seems pleased or shocked.

He eats and drinks and sleeps,

he talks of baseball and boxing,

but that is all!

She has known the aria for 8 months. The song has been mem­o­rized to the point where Susena hardly con­siders the lyrics. She feels the pulse of Odell’s accom­pa­niment and sings with a mature vibrato with dra­matic swells and pure floating tones that convey deep resentment, blind anger, and girlish love.

Steal my lips, before they crumble to dust,

Steal my heart, before death must,

Steal my cheeks, before they’re sunk and decayed,

Steal my breath, before it will fade.

The final note resounds in the hall, then dis­si­pates. Susena is at ease, slouched into a con­trap­posto.

“Your rhythm was so good. It was so good,” Odell said. “You didn’t second guess yourself, that’s the biggest thing.”

Susena said she worried about con­veying true emo­tions to the audience, but Osmond allayed her fears, urging the young singer to rely on her per­sonal expe­ri­ences and channel her emo­tions.

“It is hard for a young singer who hasn’t had these expe­ri­ences to emote about them,” Osmond said. “They can’t go inside of them­selves to find that inse­curity, that pain, that whatever that happens when you get your heart trounced on.”

But she believes Susena, now 22 years old, has had expe­ri­ences that help her perform the song. And the young singer agrees.

“I haven’t really had to pretend because I can connect to it. I have felt the feelings: anger, frus­tration, arro­gance as I come to terms with my age. A senior like me can relate to that.”

Osmond’s eyes lit up as she watched her student perform to an empty concert hall.

“This voice is special, it can do any­thing. It can be huge, she can float a tone like nobody’s business,” she said.

Susena will perform her senior recital “A Work in Progress” at 5 p.m. on Sat­urday. She said she chose the title because she feels she has developed her talents pro­foundly, but like all of us, she’s not there just yet.

Then on May 10, Susena will share her gift, honed and pol­ished over her time at Hillsdale, with a full crowd in Markel Audi­torium.

“God gave her a voice,” Osmond said. “She has now been able to do fab­ulous things with it.” 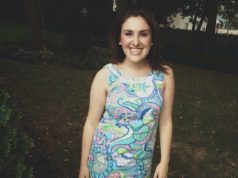 Celebrating the last four years with ‘The Last Five’ 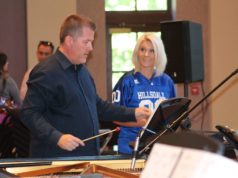 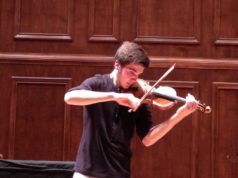 Concerto competition winners to perform in March, May