Like pieces gathered into a col­lection of art, the Slayton Arboretum has dozens of dif­ferent trees in its col­lec­tions. Hillsdale is home to many inter­esting trees, including three special tree col­lec­tions: the witch hazel, the lilac, and the mag­nolia.

“I try really hard not to have a mono­culture here to avoid the dis­eases,” said Angie Girdham, the campus hor­ti­cul­turist.

The witch hazel col­lection is perfect for the arboretum, because of its growing con­di­tions. They require partial shade and can thrive in either wet or dry soil.

“With an arboretum, you have a lot of trees so you need some­thing that can grow in harmony with other trees, and there are a lot vari­eties that are really beau­tiful,” Laurie Rosenberg, a hor­ti­cul­turist and program coor­di­nator at Hillsdale College, said. “Witch hazels bloom like exploding fire­works.”

The witch hazels are not only special because of how they bloom, but when they begin to bloom as well.

“They bloom in the fall and early spring when other shrubs are not blooming. Witch hazels com­plement the lilac col­lection because lilacs bloom in late spring,” Rosenberg said.

On the north side of the pond in the arboretum stands the bald cypress tree. These trees are not typ­i­cally found in Michigan because they prefer swampy con­di­tions.

“It’s not a super valuable or rare tree, but there aren’t any cypress swamps in Michigan, so this is valuable for here,” Rosenberg said. “This is about as far north as you would find this kind of tree.”

What makes these trees even more inter­esting is their roots. As the soil becomes more sat­u­rated with water, the roots struggle to get air. To com­pensate, the trees grow what Rosenburg calls “knees.”

“The roots that come out of the ground are called knees. They are just exten­sions of the roots,” Rosenberg said.

Oak trees are another type of large tree on campus, but they are owned by the city.

“The huge oak trees along Gal­loway drive are con­sidered to be valuable because they’re very old. You can’t replace them, so they don’t want to expand the parking lot,” Rosenberg said.

These large oak trees are one of Hillsdale city forester Gary Statchowicz’s, favorite trees. As Hillsdale’s city forester, he has a passion for these trees and wants to keep them around.

“If the college wanted to take down the trees for the parking lot, I would say ‘no way,’’’ Sta­chowicz said.

Sta­chowicz explained that over the last 30 years, trees and veg­e­tation have become more valuable. In the late 1970’s, Hillsdale adopted a city-wide tree ordi­nance, making it so if a person wanted to cut down a tree, they would have to pay for it. The cost of the tree would be deter­mined by an eval­u­ation of the tree’s size, species, location, and overall con­dition. The money would then go towards a tree fund to replace trees on major or side streets.

“We’d rather not lose our resources though,” Sta­chowicz said. “I don’t want people thinking they can just buy all these trees.”

Regardless of the complex equation that goes into the tree-eval­u­ation process, trees are not cheap. Sta­chowicz gave this example: a burl tree that is 54 inches in diameter would be worth $37,000. There are three near the post office in town, and they are some of his favorite trees, along with the oaks on Gal­loway Drive.

Parking lot expansion is not the only thing threat­ening these oak trees, however. Lately, an increasing number of cases of oak wilt has been reported.

“There’s an invasive disease coming,” Girdham said. “Our city forester is going out of his way to pre­serve the oaks.”

Oak wilt is trans­mitted by beatles and can kill an oak tree in just one season. To prevent this from hap­pening, the oak trees can only be pruned at certain times of the year.

East College Street is also home a unique tree: the gingko. These hardy trees were once thought to be extinct but were later found in China, pre­served by Bud­dhist Monks.

“Gingko trees are a little bit unusual. They’re pretty popular now, and are known to be present from fossil records,” Rosenberg said. “They’re resistant to dis­eases and insects and don’t have any pests that have evolved with them.”

The gingkos on campus can be found in front of the Sage Center for the Arts, on the west side of the library, and across the street from Broadlawn. Girdham said Penny Arnn loves her gingko tree that lives across from Broadlawn.

The unusual rubber tree also has a home near the Roche Sports Complex.

“I planted it for a dif­ferent variety,” Girdham said. “You can see the latex in the leaf when it’s torn. The only downside is it has no fall color.”

An inter­esting tree that Girdham planted is a hardy coffee tree.

“They get really wide, like over 100 feet wide,” Girdham said. “I planted it in hope that he’ll amount to some­thing spec­tacular. They start off really scrawny.”

This spring, the witch hazel will bloom in fire-cracker fashion, the coffee tree will grow into some­thing spec­tacular, and the knees of the bald cypress tree will expand for more air.

These trees, young and old, scrawny and large, col­orful and bland, all con­tribute to the won­derful variety on campus. 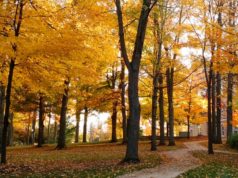 City prepares for spring with cleaning and construction 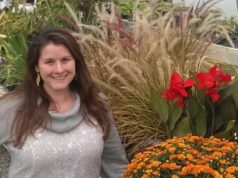 Girdham works around the year to make campus beautiful 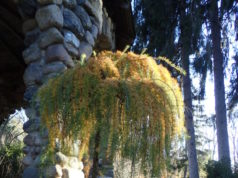