The recent weeks have seen wide­spread protests regarding the latest school shootings and the issue of gun vio­lence. First was the National Walkout Day on March 14, which fea­tured numerous student walkout rallies on mul­tiple college cam­puses and public school dis­tricts, including the dis­trict where I attended high school in Georgia.

Next was the so-called “March for Our Lives” in Wash­ington, D.C., on March 24. It was a series of demon­stra­tions that also called for more gun control leg­is­lation in the wake of the Marjory Stoneman Douglas High School shooting in Florida. From the lens of the main­stream media, you would think that these protests mainly compose of stu­dents walking out of school to protest for gun control. You might think they protest against the National Rifle Asso­ci­ation out of fear of another pos­sible school shooting that could threaten their lives. Hence, the media would want you to believe that these protests’ sup­porters are serious about solving the problem of school shootings. They are not.

According to Uni­versity of Maryland soci­ology pro­fessor Dana R. Fisher, who sur­veyed the march’s par­tic­i­pants, kids less than 18 years old made up only 10 percent of the march in D.C. Fisher also noted that the average adult pro­tester was slightly younger than 49 years old.

The march also fea­tured David Hogg, a sur­vivor of the Parkland school shooting, who has now become a favorite tool of the media in its support for the gun control agenda. But rather than having a serious con­ver­sation on how to prevent future school shootings, the march’s orga­nizers mainly resorted to slan­dering the char­acter of those who dis­agree with them.

At the D.C. march and other related rallies, Hogg and other anti-gun demon­strators have called the NRA and Second Amendment sup­ports child mur­derers while bashing Marco Rubio and other politi­cians for being bought by the NRA at the expense of the lives taken at the Parkland school shooting. To sum it up, they have cast the oppo­sition as people who don’t care about the lives lost to the tragic school shootings that have recently hap­pened.

Though Hogg deserves sym­pathy for the trauma he went through at the Parkland shooting, he cer­tainly does not speak for all shooting sur­vivors. Each sur­vivor of these tragedies as well as their fam­ilies and loved ones has a right to think for them­selves. In fact, a handful of the Parkland shooting sur­vivors and their family members, including Kyle Kashuv and Hunter Pollack, have come out against extreme gun control mea­sures, and Hogg and other gun control advo­cates have no right to bully these people into thinking in a certain way. Had the “March for Our Lives” movement really wanted a serious con­ver­sation about saving lives, it would at least include Kashuv and Pollack in the dis­cussion. Yet, neither of these sur­vivors were invited to attend the march, and according to Pollack, he was even denied a speaking slot. Con­ser­v­a­tives have brought up solu­tions such as arming teachers and hiring armed guards to protect stu­dents from future shootings, yet the march and its sup­porters almost never con­sider these alter­na­tives. Both Sen. Rubio and his Demo­c­ratic home-state coun­terpart Bill Nelson are pushing sen­sible school safety leg­is­lation as an alter­native to the anti-Second Amendment solution sup­ported by Hogg and the “March for Our Lives” demon­strators yet Hogg has gone on a pro­fanity-ridden rant against them instead of giving serious con­sid­er­ation to these alter­na­tives.

Sen. Nelson typ­i­cally toes the pro­gressive party line of the Democrats, but if his leg­islative work with Marco Rubio cannot satisfy the “March for Our Lives” sup­porters, then at some point, one would have to question if the movement’s anti-gun extremism is pre­venting our ability as Amer­icans to solve the problem of school shootings. More impor­tantly, one would need to second guess whether the movement is even serious about saving the lives of stu­dents threatened in future school shootings. In the end, the “March for Our Lives” movement, one that gets vocal support from Planned Par­enthood, a group known for mur­dering and tearing apart babies, is not serious about children’s lives after all. It is an extremist movement all aimed at bul­lying law-abiding cit­izens into sur­ren­dering their Second Amendment right, pure and simple.

In Fed­er­alist 1, Alexander Hamilton warned of a “torrent of angry and malignant pas­sions” that would turn a republic into an absolute state. By throwing F‑bombs at the NRA and labeling Second Amendment sup­porters as child killers, David Hogg and the “March for Our Lives” movement, with help from the main­stream media, have unleashed these violent pas­sions and bring about the very dem­a­gogues that Hamilton and the founders warned of. With Hogg and these gun control advo­cates attempting to translate these pas­sions into political results in the 2018 midterms, one should be very wary of the anti-gun Democrats who could take control of the US House and pos­sibly the Senate. 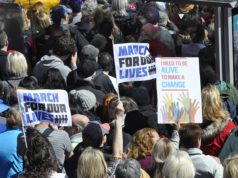