After working on the project for more than a year, senior Chandler Ryd is preparing to release his first short film. With the help of former student Josh Hamilton, a few pro­fes­sional actors, and a couple of pro­duction com­panies, “Into the Plains” is almost ready for the big screen.

“Into the Plains” is a 25-minute film written, pro­duced, and directed by Ryd, in which he explores the nature of grief through a mother who loses her child and embarks on a road trip.

“I agreed to work on the project before I read the script. Chandler is a Simpson man. That means we have a duty, within reason, to help each other. I have aided Chandler on past projects, and he has aided me,” Hamilton said in an email. “It was clear that the script came from Chandler’s heart, and friends — Simpson boys — support noble endeavors of the heart.”

Even senior Beau Jarett, another former Simp­sonite, came on set for a day to help his friend.

With the script done and the crew set, Ryd had to select four cast members. Ryd found his lead actress, Maggie Alexander, a New York-based theater and film actress, through an orga­ni­zation called Breakdown Ser­vices. Even though Alexander con­tacted Ryd two days after the deadline, Ryd let her send a self-taped audition.

“And then it turned out that she was amazing. I saw that one tape and thought, ‘Yes, this is it. This is the one.’ Even just from maybe the first 10 seconds, I was pretty sold,” Ryd said. “For Anna, the main char­acter, it wasn’t that the other actresses were bad, I just didn’t think that they quite under­stood the char­acter and they didn’t quite have the sub­tlety that the role really needed.”

In her prepa­ration for the char­acter, Alexander spent an afternoon dec­o­rating a crib with her imag­inary child’s name and birthdate and then scraping his name off the wood, tearing the crib apart, and even­tually throwing it away.

“I went pretty far down the rabbit hole with this film. At the end of each filming day, it was hard to shake it off com­pletely,” Alexander said in an email.

But her prepa­ration led to a believable per­for­mance that Ryd said he felt cap­tured the character.

After selecting the cast, Ryd decided to film in his hometown of Col­orado Springs over Christmas break. After one rehearsal day to bring all the cast together to talk through the script and get to know each other, they spent four long days of filming.

Ryd orig­i­nally planned to film inde­pen­dently with the help of Hamilton and a few other friends, but a pro­duction company dis­covered his script online. Access Media Group offered to bring its own pro­fes­sional equipment and help with the filming, all for free.

“A week before shooting I had a pro­duction company reach out to me and wanted to help me out. They all vol­un­teered their time and gear for free,” Ryd said. “If I had paid them like a normal job, I would have had to pay them like 15 or 20 grand. And so they were just so gen­erous and I was just so blown away. And they really helped elevate the scenes that they did shoot with us.”

Even with the help of AMG, the days of filming were intense and not free from hiccups.

The first scene was filmed on a cliff, which meant an hour-and-a-half drive into the moun­tains and then a race against the setting sun to get the scene filmed. They fin­ished the scene and headed back to Col­orado Springs, but Hamilton had left a lens on the cliff. So Ryd and Hamilton had to drive back to the mountains.

“This was at about 9 p.m. that we realized this and we had a 5 a.m. call time for the next shoot day. I get a coffee, he gets a monster and we just drive up into the moun­tains,” Ryd said.

After finding the lens, then watching the car die on them on the last leg of the trip back home, Ryd, Hamilton, and the crew still got the next day of shooting done on schedule.

“I was never super stressed about it. It gets to the point when you’re shooting some­thing, just nothing really stresses me because things always go wrong and we always seem to figure stuff out,” Ryd said.

With the filming fin­ished and the edits almost done, the last step is to add the post-pro­duction sound, which another pro­fes­sional company offered to do. Ryd hopes to com­plete “Into the Plains” by late June and to release it at a film fes­tival in the fall.

“It’s going to be way better than I ever thought,” Ryd said.

In the meantime, Ryd is already thinking about his next film.

“Of course there’s another movie,” he said. “I already have it in my head.”

CCA speaker lectures on Jane Austen and the ‘moral moment’ 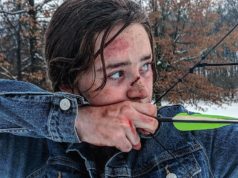 The girl who never wore makeup: how one student became a special effects makeup artist 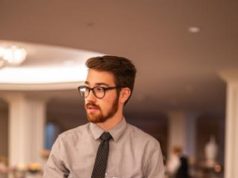