To balance hard, intel­lectual study with light­hearted enter­tainment, Hillsdale stu­dents play a variety of official and less-official games. While games such as the naval battle are planned, many other games, such as “assassins,” are less insti­tu­tional, and stu­dents spon­ta­neously play such games as “sar­dines” and “murder in the dark” for fun, simple Sat­urday nights.

The most rec­og­nizable of these games is “assassins,” which guys in Simpson Res­i­dence have the option to join. Everyone on campus can usually tell when it’s being played because male stu­dents will lurk around warily while friends shout at them, “Have you been killed yet?”

Junior Andrew Lohman, one of the dorm’s res­ident assis­tants, is one of the main orga­nizers, or “gamemakers.” According to Lohman, this game has been played in Simpson nearly every year for five years.

Lohman explained the game: Everybody who signs up to play is assigned another spe­cific player to pursue as a target, and a “kill” is made by tapping a spoon some­where on the target’s torso. Once a person has been tapped, they are out of the game.

Spoons were chosen as the tagging item because “a spoon is a blunt object, and it pro­vides per­sonal, close contact, forcing you to actually look into the eyes of your killer,” Lohman said.

Lohman said “assas­si­na­tions” can be made any­where on campus except bed­rooms (“so people can sleep”), the cafe­teria (“so people can actually enjoy meals”), and class­rooms with pro­fessors (“but, if the pro­fessor leaves in the middle of class, you can go right ahead and get your man”).

While there are rules about safe zones, Lohman said there are no rules about any­thing players say in the game. Appar­ently, lying about your motives is often used to achieve an assas­si­nation.

“Assassins” doesn’t always have a buy-in, but through a general con­sensus, Lohman insti­tuted a $1 buy-in for this year’s game.

“We do it if it’s what the guys want,” Lohman said. “It’s so the winner can have a prize outside bragging rights and also so we get people who actually want to play, not just people signing up other people as jokes. It’s not as intense if people don’t take it seri­ously. But the money’s not why people play.”

The game ends when all the players except one have been “assas­si­nated” by spoons.

“Our most recent game was over rel­a­tively quickly com­pared to some games. It was only five or six days long,” Lohman said. “We’re antic­i­pating another game later this semester. The people who didn’t join this round realized they were missing out.”

A less-involved group game played on campus is “sar­dines,” a game like hide-and-seek where one player hides and everyone else seeks. When somebody finds the hiding person, he or she has to hide with them — and so it con­tinues until there’s only one person left and a crowded hiding spot.

“Both times it went on for several hours, which I wasn’t expecting,” Tan­quist said.

Tan­quist said that he’s played both games in the Grewcock Student Union at night.

“It doesn’t work during the day because people are around,” he said.

While you might not think that the Grewcock Student Union has too many places to hide, Tan­quist said oth­erwise.

“Every time, you expect you know every­where people will hide,” Tan­quist said. “I have a routine, a way of searching that sweeps through the whole building. But most of the time I still miss the person who’s hiding.”

Tan­quist said that the first place people usually try to hide is the ele­vator. But some people get more cre­ative.

“Once somebody emptied the trash can, took out the bag, and put it in the guys’ bathroom, and hid them­selves inside the trash can,” Tan­quist said.

Space is also an issue, so some­times people have to spread out around the general area if the first hiding spot is too small (like a trash can).

As far as Tan­quist knows, the game isn’t widely played across campus.

“I’ve only ever been involved in it,” Tan­quist said. “I’ve never come across a game. Some­times in Lane and Kendall things will be dark and people will be running around, but I never see that in the union.”

The game Tan­quist observed in classroom buildings Lane and Kendall halls could have been “murder in the dark,” a game often played there, according to sophomore Zachary Palmer.

“As far as my knowledge goes, this game was born in Nied­feldt my freshman year,” Palmer said. “I never knew it existed before then.”

Palmer said he has played murder in the dark at least 20 times with big groups of people. He also said you have to set aside at least two hours to play.

According to Palmer, murder in the dark is like the party game “Mafia” trans­lated into action. Instead of the anony­mously des­ig­nated Mafia choosing victims by pointing, all players are let loose in dim halls to wander until the players acting as the Mafia phys­i­cally tag them to put them out of the game.

“People do this group­think thing where they try to be with other people,” Palmer said of this part of the game. “It’s sus­pi­cious if somebody’s alone, or walking too slowly — every­thing you do is sus­pi­cious.”

The game goes on with periodic con­ven­tions for guessing who belongs to the Mafia until either a majority of Mafia members remain or the non-Mafia members, termed “towns­people,” vote all Mafia members out of the game.

“Polit­i­cally, it’s a mess,” Palmer said. “Every game I’ve played, the towns­people don’t under­stand that they shouldn’t wan­tonly accuse people. Nine out of 10 games, more towns­people are killed by their own kind.”

The need for strategy applies to the Mafia, too.

“Mafia are caught when they’re sloppy at killing or just make a verbal mistake in public — when they claim they were some­where and somebody else knows they weren’t there at the time,” Palmer said.

So what makes a good Mafia member?

“The best ones hide and play people off each other. Some­times they sac­rifice another Mafia member to throw people off the trail,” Palmer said. “You get to see who’s good at manip­u­lating other people.”

Tan­quist gave a no-frills reason as to why exactly Hillsdale stu­dents get together to play games like sar­dines, assassins, and murder in the dark.

“Both times I’ve played sar­dines,” Tan­quist said, “it’s been a spon­ta­neous act because it seemed fun at the time. And it was fun.” 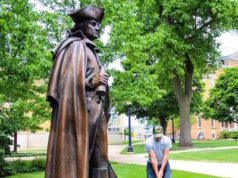